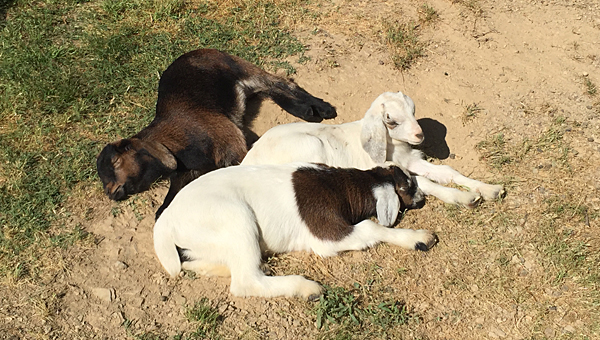 By RYAN BASS / Special to the Reporter

Beginning in February, the park began welcoming the first of 12 baby goats. According to Farm Manager April Headley, one set of twins was born Feb. 12and another on Valentine’s Day. Once April came, they welcomed a set of triplets and two sets of twins.

The babies have brought lots of visitors to the park, as “Lots of repeat visitors come just to check on them. People really want to watch the new babies grow,” said Headley.

In addition to the goats, the petting farm also has a miniature pot-bellied pig named Wilbur; four regular pot bellied pigs; three donkeys; including one named Taylor, who according to Park Ranger Randy Spivey is the “Park Mascot,” a Shetland pony named Princess; chickens; ducks and 13 adult goats, including one named Boots.

Managing all of this can be a challenge, but according to Ranger Spivey, April handles this better than most.

“April is the best manager we have had in the petting farm in a long time. You can tell she loves her job, because not only is she caring and compassionate, but she has a personal relationship with the animals. When the goats went in to labor, she actually drove back to the park from her home in Clanton to be with them. Knowing she’s here takes a load off me, which helps me attend to my other stations in the park,” said Spivey.

Being a great manager takes time and patience, something April knows a lot about. From the week of May 11-14, there had been more than 600 children visiting the farm.  While that’s a huge number, April said, “Overall the number of visitors is down from last year, but we are hoping that the new babies, and the fact that summers coming brings more people in.”

By BAKER ELLIS / Sports Editor On May 2, Emmanuel Tait won gold medals in both the 7A 110 and... read more