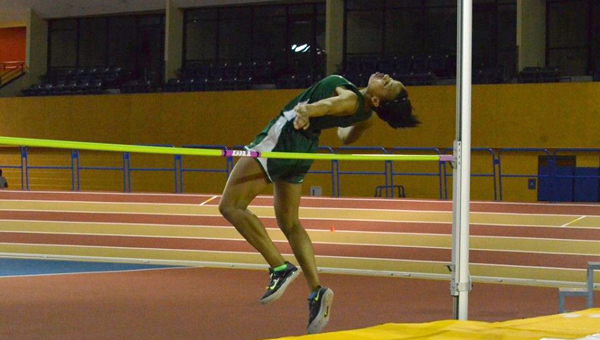 Erin Hines, shown here earlier this year in the indoor track and field season, competed in the state wide heptathlon at Hoover High School from May 11-12 and placed third out of 37. (Contributed)

HOOVER – From May 11-12, Erin Hines, the do-it-all leader for the Pelham Lady Panthers track team which placed second in the 6A state meet, placed third in the heptathlon at Hoover High School. The heptathlon and the decathlon, the former for the girls and the latter for the boys, take place a week after the state track meets, and the most versatile athletes in the state participate.

The heptathlon is made up of seven individual events, the 100-meter hurdles, the high jump, the shot put, the 200-meter dash, the long jump, the javelin throw and the 800-meter run. There is a complex scoring system where points are divvied out to athletes for each event based on their performance in that event and its’ relative orientation to a designated “standard” performance. For example, a “standard” performance in the high jump is 1.82 meters, so any athlete who achieved that height would be granted 1,000 points for the event. The farther below that number a performance is, the point total will diminish accordingly. Under this format, athletes are still competing against each other, but are also trying to hit or outstrip accepted benchmarks for each event.

To be competitive in the heptathlon, an athlete has to be versatile. Hines fits that bill quite well. In the 2015 6A state meet, Hines placed in the top five in the 400-meter dash, the 300-meter hurdles, the high jump and the long jump. Such a wide skill set is optimal for an event like the heptathlon.

Hines had consistently high numbers in each event. Most notably, her time of 2:25.76 in the 800-meter run gave her 747 points, second only to the 776 points Frances Patrick of Mountain Brook received for her time of 2:23.56. Hines also shone in the high jump, where her jump of 1.53 meters got her 655 points.

Hines’ biggest strength in the meet, however, was not her performance in any one event, rather, her ability to consistently perform well in every event. Her lowest, 434 points in the javelin throw, was the third-highest low score of the 37 competitors, and allowed her to stay close to the top of the pack. She finished with 4,428 points, just 42 points behind second place.

Life in the Fast Lane