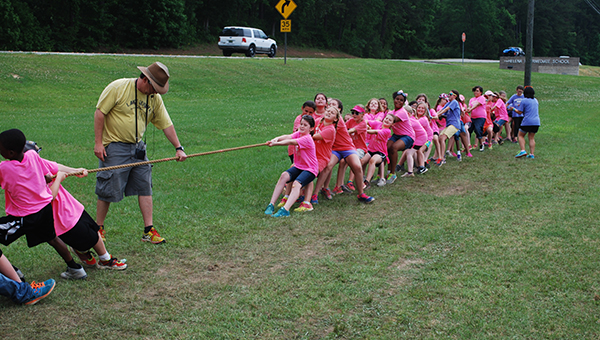 HIS students compete against each other in a tug-of-war contest at H-Day on Friday, May 15. (Reporter Photo/Graham Brooks)

HELENA–Bright T-shirts, hats and sunglasses were all on display at Helena Intermediate School as students competed in various activities for the annual HIS H-Day.

Students got a break from the regular curriculum and spent the majority of the day outside having fun.

Students were divided up according to grade level where they then competed in games and team building activities such as ski race, tug-of-war, water relay and flag football.

“I’m just glad the rain held off,” Helena Intermediate School Principal Kathy Paiml said with a sigh of relief. “It’s just a fun day, they love wearing their hats and their sunglasses and it just makes it a fun day. We try to do at the end of the year.”

Along with the activities, Frios Gourmet Pops also made a visit to the school and students enjoyed a variety of popsicle flavors to cool down after participating in their games.

Each grade level had two hours to rotate between the four stations, and by reading the expressions on the students’ faces, it was easy to see that they were enjoying the day.

The girls faced off against the boys in tug-of-war and although the girls gave it everything they had, the boys were still able to come out with the victory. Loud cheers and high fives were given after the boys won twice in a row.

The last day of school for HIS is Thursday, May 21 and next week the school will also host a talent show and fifth grade awards.

The Helena Middle School soccer team poses for a picture with their trophy after becoming the Shelby/Jefferson Middle School League... read more