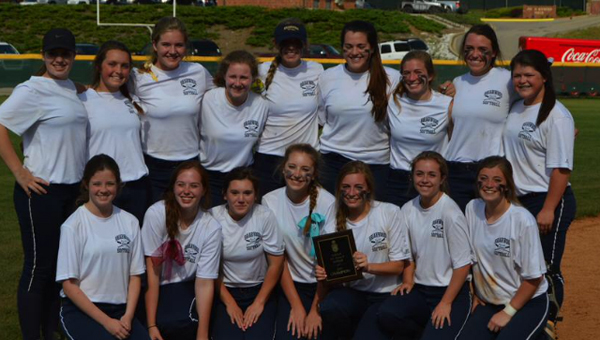 The Briarwood Christian Lady Lions softball team finished their season with a 17-13-1 record and a 6-0 record in 6A Area 9. (Contributed)

BRIARWOOD – Karen England knew there was going to be a gaping hole in the infield for her Briarwood softball team this season. Coming into the 2015 campaign, there was a void left by, as England put it, “probably the best player in the history of our program,” in Morgan Reed. Reed, a shortstop in high school for the Lady Lions, took her talents to Notre Dame and was named to the second team All-ACC in her freshman season.

Marleigh Miller, Madison Chambers and Hannah Hall were the seniors who helped lead this Briarwood team, and all provided senior leadership. Chambers played third base and had the highest batting average on the team, finishing the year hitting .418 from the plate, and she is committed to play softball next season for Southern Union.

“We knew we had some strong returning players,” England said in a May 15 interview. “We had a good returning group, but had some inexperience.”

Among those inexperienced newcomers were eighth-grader Taylor Wheat, who caught for the varsity team and had an impressive season, according to England.

Briarwood finished with a 17-13-1 record on the year and finished 6-0 in area play. The Lady Lions also won the Lady Lion Classic, an annual tournament they host which this year brought teams such as Homewood, Pleasant Grove and Thorsby to participate.

Looking ahead to next season, England and Briarwood will rely on rising seniors Rachel Walz and Linley Splawn to lead the way. Walz hit .405 this season and filled the void left by Reed at shortstop. Walz is also a verbal commit to Samford University, where she will play for the Lady Bulldogs. Splawn handled most of the pitching duties for Briarwood this season, and is a dangerous left-hander.

When Splawn was not handling the pitching, outfielder Amelia Moore stepped in to shoulder the load this year.

“We’ll have good pithing with Linley,” England said. “We’ll have to replace third base, that will be our biggest hole to fill.”

Briarwood won Area 9, but was knocked out of the postseason by Gardendale in the second round of the consolation bracket of the North Central Regional tournament.

By BAKER ELLIS / Sports Editor On May 2, Emmanuel Tait won gold medals in both the 7A 110 and... read more