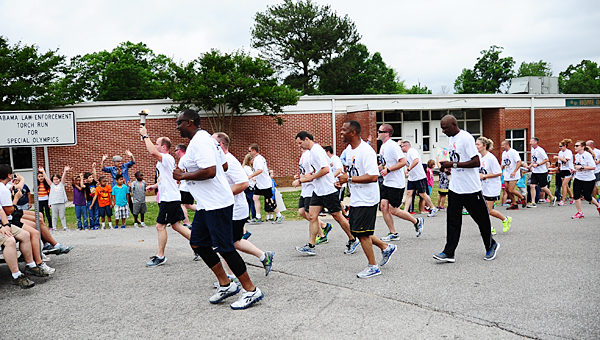 Law enforcement officers from across the state complete the Pelham leg of the 2015 Law Enforcement Torch Run as Valley Elementary School Students cheer them on. (Reporter Photo/Neal Wagner)

PELHAM – The hundreds of kids lined up in front of Valley Elementary School burst into cheers and applause the second they saw the caravan of police cars crest the hill on U.S. 31 on May 15.

The cheers grew louder as a group of more than 50 runners in the middle of the line of law enforcement vehicles came into view – the lead runner hoisting a burning torch in the air.

Students waved signs reading “We support Special Olympics,” “Torch Run 2015” and “VES loves Special Olympics” as the runners high-fived the line of children while jogging by.

The spectacle marked one of the final legs of the 2015 Law Enforcement Torch Run for Special Olympics, during which law enforcement officers from all over the state transport a torch from Huntsville to the state Special Olympics opening ceremony in Troy on May 16.

After the Torch Run began in Huntsville on May 14, the group traveled through Athens, Decatur, Cullman, Gardendale and Birmingham before completing the Pelham leg on May 15.

The local leg of the run, which involved about 100 officers from across the state, set off from the Pelham Civic Complex at 8:30 a.m. before running south on U.S. 31 to Valley Elementary and then traveling north to Alabama 119.

Shelby County Sheriff’s Office deputy Debbie Sumrall, who has been involved with the Torch Run since 2009, said she doesn’t think twice about volunteering to organize the Pelham leg each year.

For Sumrall, seeing the children’s smiling faces at the state games is all the reward she needs.

“When you have people cheering for you and patting you on the back, you’re going to do well,” Sumrall said. “Unfortunately, individuals with intellectual disabilities don’t always have that.”

Pelham Police Chief Larry Palmer, whose officers had a large presence at the run on May 15, said he is proud Pelham plays a role in the event each year.

“I tell the guys ‘This is one of the most important jobs we have,’” Palmer added.

The Briarwood Christian Lady Lions softball team finished their season with a 17-13-1 record and a 6-0 record in 6A... read more