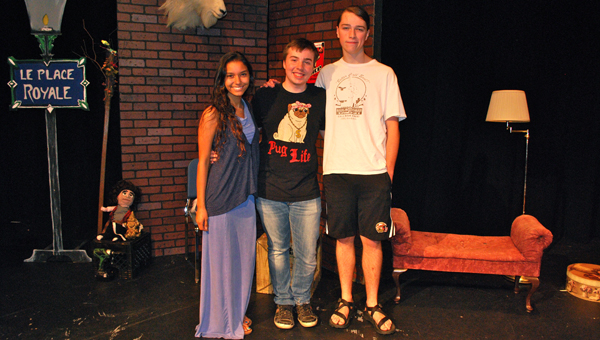 Spain Park’s Asia Rodriguez, Conor Mahoney and Sam Hankins received recognition from a pool of more than 200 actors from the top 20 schools from 10 states. Rodriguez and Mahoney were both named to the All-Star Cast while Hankins received the prestigious Best Supporting Actor award.

“I have some really dedicated kids. They really go out there and give it their all,” SPHS theatre instructor Eric St. John said. “The three kids who won, it was really nice to have them win because they’re all seniors.”

Hankins has been a dedicated member of the theatre program since his freshman year at SPHS. He will continue his acting career majoring in theatre at Troy University in the fall.

“Sam has been extremely dedicated these past four years,” St. John said. “His first year, he was involved in all three of the big shows we did, and he just hasn’t stopped being part of it since.

Mahoney has also been involved in theatre since freshman year. Mahoney will begin his freshman year at Auburn University this fall.

“This year he was wonderful as the lead in ‘The Liar,’” St. John said. “He’s been a lot of fun to work with, he’s got a very laid back attitude.”

Rodriguez discovered her love for theatre as a sophomore. She will continue pursuing theatre in college at the University of West Florida.

“This is actually only Asia’s second year, she started with us last year,” St. John said, commenting on her involvement in both “A Midsummer Night’s Dream” and “The Liar.”

Hankins, Mahoney and Rodriguez all agreed theatre has been a highlight of their high school careers and taught them lessons they can carry into college and beyond.

“It’s almost like a safe place, to be honest,” Rodriguez said. “Once we come into this room, we get to let ourselves go and let our personalities run rampant.”

“It’s presented a really good outlet,” Mahoney agreed. “It’s something to be proud of.”

Hankins commented on the teamwork aspect of theatre.

“It’s not only you, but other people… bringing in each other’s talents,” Hankins said. “You realize what makes good theatre is putting your all into it. There’s no ‘I cant’ do this.’”

Chelsea High School senior Jake Cotton, right, was honored at a May 13 luncheon as the first recipient of the... read more