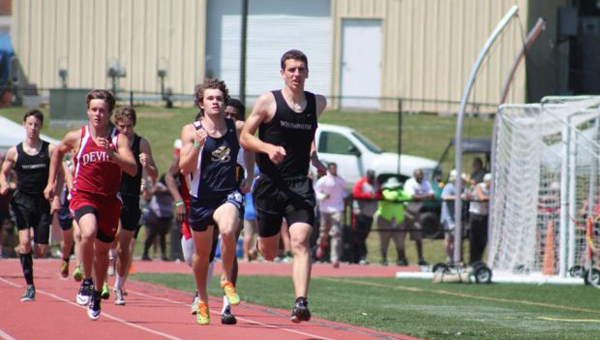 Jake Carrell won his second-straight 800-meter run state title for the Westmister School at Oak Mountain on May 1, Carrell was also a member of the first-place 4×800-meter relay team as well. (Contributed)

When Westminster School at Oak Mountain junior Jake Carrell toed the line prior to the start of the 800-meter run at the 1A state meet at Cullman High School, he was doing so for only the third time in the 2015 season. A lingering hamstring injury, suffered during cross-country season, had stunted the defending open 800-meter champion’s progress in the spring.

Nevertheless, Carrell fended off Marco Tona from St. Bernard and ran a 2:01.55 to win his second consecutive 1A state title by exactly two seconds. Cullman was the sight of the 1A-3A state meets, and Carrell’s time was the second-fastest time across all three classifications.

A track runner since the seventh grade, Carrell found his niche not long after. He started running middle distance races in the eighth grade, but didn’t feel confident in his ability to be elite until high school.

“It was probably in ninth grade,” Carrell said. “In the indoor season. I had been running about 2:10 or 2:11 and I was worried I was going to be last in the heat. I ran the race and my dad, who’s also my coach, told me to stay on the pack. I finished and I was super tired, but I had gone from a 2:10 to a 2:05. That was probably the realization that I could do this.”

Carrell’s personal best in the 800 is a 2:01.06, which he set his sophomore year. He believes he could have gone much lower than that this season if his hamstring would have cooperated.

“I was hoping to be sub-2 (minutes) this year, but because of my injury it didn’t really pan out,” Carrell said.

Looking into the future, Carrell hopes to have the opportunity to run in college. He also has a 4.0 GPA and is interested in pursuing a career in biochemical or biomedical engineering, and wants to go to a school that has a strong biology department.

On the track in his senior season, he is hoping to stay healthy first and foremost. He believes if his health holds up, he will be able to hit 1:56 or 1:57 in the 800.

“That’s realistically what I want to hit,” he said.

In 2016, he will try to bring home his third consecutive 800-meter run gold medal.

By BAKER ELLIS / Sports Editor MONTGOMERY – Less than a week after placing second in the 7A North Central... read more