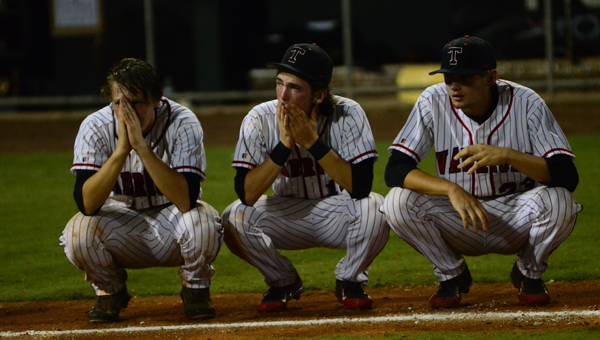 Thompson fell just short of the 7A state title, losing in the championship series to Smiths Station on May 16. (Reporter Photo / Baker Ellis)

MONTGOMERY – The Thompson baseball Warriors had the hardest first two playoff weekends of anyone in the state. Right off the bat, Thompson had to come back from a game down to beat second-ranked Mountain Brook in three games to advance to the next round, where the Warriors faced No. 1 Vestavia Hills. Thompson knocked off the top-ranked Rebels in successive games to advance out of the toughest region in the state.

In the semifinals, Thompson went on the road knocked off unranked Sparkman in three games to get to the state championship in Montgomery. In the state finals, the Warriors faced a hot, unranked Smiths Station team who seemed to always be in the right place at the right time on this night.

In the opener, Thompson ace Colin Lillie took the mound as he has done so often this season. Lille has been a mainstay pitcher all season, routinely taking care of business. On this night, he threw 94 pitches over six innings, allowed three hits on six runs and struck out five, and all three runs came in the bottom of the first inning.

Down 3-0 heading into the fourth, the Warriors knocked one run across the plate when Lewis ripped a single to right field, which was good enough to score Heath Haskins from his perch on third base. In the top of the seventh inning, Zach Brammer hit a rope of a triple to right field, which scored Chris Lewis to bring the score to a razor-thin 3-2. However the very next batter, Riley Reach, grounded out to third to end the game and subsequently put Thompson in a 0-1 hole.

In the second game, the wheels fell off for the Warriors. Thompson took a 1-0 lead into the top of the fourth inning before Smiths Station pumped four runs across the plate to take a commanding 4-1 lead. Thompson got two of those runs back in the bottom of the inning to bring the score to a very manageable 4-3.

In the bottom of the fifth, with the one out and a man on second, Lewis hit an absolute rocket, which seemed to have enough juice to roll to the outfield and at least tie the game, however the Smiths Station pitcher made a miraculous, split-second catch and turned around to throw Jonathan Crawford out at second for a huge, potentially game-tying swing.

It was in the top of the sixth inning where the game got away from Thompson. The first six Smiths Station batters reached base safely, two via error, and the Panthers ended up hanging seven runs on the Warriors in the top of the inning to take an insurmountable 11-3 lead. Thompson could not recover from the inning, and lost 11-4.

“Tonight we hit tons of balls hard, just right at them,” Thompson head coach Pat Hamrick said after the game. “They seemed to get all the breaks tonight, and I guess when it’s your year, it’s your year. This year, we didn’t get the breaks. We just didn’t play as well as we’ve been playing all year.”

Thompson ended the season with a 31-18 record and finished runner-up in class 7A.

By BAKER ELLIS / Sports Editor MONTGOMERY – Less than a week after placing second in the 7A North Central... read more