Chelsea drops out of 6A state tournament 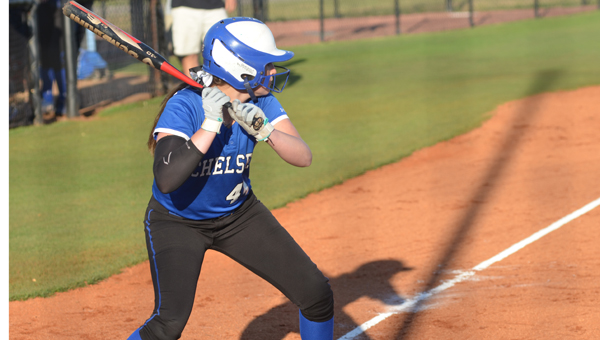 Alexis Eisenberg and the Chelsea Lady Hornets finished the 2015 season with a 19-14 record and an appearance in the 6A state tournament. (File)

MONTGOMERY – Less than a week after beating Walker 5-0 to win the 6A North Central Regional tournament, the Chelsea Lady Hornets went to Montgomery to take part in the 6A state tournament. Chelsea took on Hillcrest-Tuscaloosa in the first game, winning 4-0 to move into the second round of the winner’s bracket. Southside-Gadsden then beat the Lady Hornets to knock them in to the consolation bracket, where they faced Cullman. The Lady Bearcats blitzed Chelsea, and knocked the Lady Hornets out of the 6A state tournament via a 17-2 loss.

Chelsea ace Sarah Cespedes took the mound in the opening round of the 6A state tournament and never relinquished her post. Cespedes threw 121 pitches over seven innings, gave up no runs on five hits and struck out four. With Cespedes throwing some of her best stuff, the Lady Hornets only needed minimal offense to continue win the game, and three runs in the bottom of the third and another in the fifth were more than enough to get the job done.

Allie Miller led the way for Chelsea from the plate, going 3-for-3 in the opening game. McKenzie Bryant, Tristan Ziannis and Bailey Coyne each registered a hit as well.

Southside-Gadsden hung a single run on Chelsea in the first inning, which proved to be the only run of the game. Alexis Eisenberg pitched the entire game for the Lady Hornets, throwing 93 pitches over six innings. Eisenberg gave up just one run on three hits and struck out six. With such a dominant performance from the mound, Chelsea only needed to muster a small amount of offense to have a chance to win the game, however the Lady Hornets only combined for three hits total, and fell 1-0 to fall into the consolation bracket.

In the consolation bracket, Chelsea could not hang with Cullman, and fell 17-2 to end its season. The Lady Hornets finished the 2015 season with a 19-14 record and an appearance in the 6A state tournament.

Thompson fell just short of the 7A state title, losing in the championship series to Smiths Station on May 16.... read more