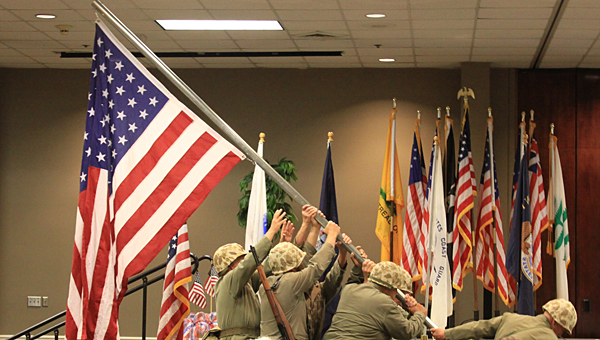 By JORDON SEMIEN / Special to the Reporter

PELHAM – The Cahaba Valley Elks Lodge strives to be a fraternity and charity committed to its community. Be it through hosting community contests, or raising $10,000 in the past year to bring comfort kits and snack packs to dialysis patients in the Pelham area.

The lodge’s next venture is a favorite of both theirs and the community: The seventh annual Flag Day celebration, being held at the Pelham Civic Complex on Sunday, June 14from 2 p.m. to 4 p.m.

The celebration began as the brainchild of lodge member Liz Bishop as a venue to encourage a new sense of patriotism in the Pelham community. Lodge member Sharon Gaydon recalled the first Flag Day as a celebration that would honor our flags and those who have served, adding, “It began with having musical tributes, flag history, and the honoring of the branches of our military.”

The event includes The Blue Star Salute Foundation’s photo board of Fallen Heroes from the state, along with the Lodge’s own “Elks Care ~ Elks Share” story board, comprised of the community’s schools, veterans and citizens.

The members of the lodge take great pride in their philanthropic works, honoring the winners of their yearly contests and outstanding members of the community by including them in the Flag Day celebrations.

Gaydon said in this year’s program, the lodge will recognize two outstanding youths in the Pelham area. This year’s Miss Shelby County, Tiara Pennington, will perform a musical selection, while the Pelham chapter of the Boy Scouts will participate in the ceremonial folding of the flag.

The push to bring in a younger crowd to participate with this year’s event stems from the Elks Lodge’s desire to pass down the same love for country and sense of patriotism that created Flag Day to the next generations. Gaydon said “The goal was to make sure that our young people carry on the traditions that we at Cahaba Valley Elks Lodge and as citizens promote patriotism and respect for the flag and love of country.”

For more information on this year’s program, contact Lodge President Liz Bishop at (205) 365-2268

(Contributed) FROM STAFF REPORTS ALABSTER – The Alabaster Rockets won the city championship for U8 girls softball, finishing with an... read more