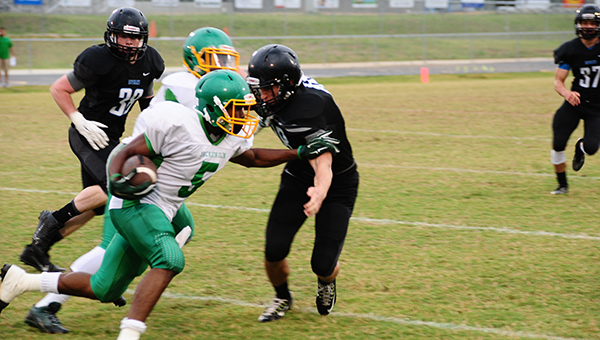 The Helena Huskies and Jackson-Olin Mustangs met on Saturday, May 16, in a spring game that saw the Mustangs come out on top 8-7. (Reporter Photo/Graham Brooks)

HELENA–It was a busy Saturday for Helena athletics as the varsity baseball team was fighting for a state baseball title in Montgomery and back in Helena, the varsity football team took on the Jackson-Olin Mustangs in a spring game at 7 p.m.

Huskies fans and coaches got a first glimpse of the Helena football team as they prepare to enter their second year as a program.

In a game that saw multiple players play on both sides and not many breakthroughs offensively, the Mustangs were able to defeat the Huskies 8-7.

Helena head coach Watt Parker admitted that Helena only implemented two pass plays and two run plays and that spring was pretty limited due to the fact they wanted to support the baseball team through the playoffs.

“In the springtime you really want to focus on the fundamentals,” said Parker. “You want to learn how to block, tackle and you want to make sure your fundamentals on offense and defense are solid. We had a very limited spring this year due to the baseball playoffs, we took days off to support our baseball team but it was a lot of fun, I thought our guys had a lot of improvement in a lot of areas. We had about eight starters that weren’t playing tonight but that’s just part of it.”

The first quarter saw many three and outs and change of possessions as neither team could really get the ball moving offensively.

Helena got on the board in the second quarter after a quarterback draw up the middle to put the Huskies up 7-0.

A big play in the third quarter came after a long pass by Jackson-Olin was bobbled and fought for by both the Helena defender and receiver and the Mustangs came up with the ball.

Jackson-Olin eventually scored and after a late hit by Helena in the end zone, the Mustangs successfully converted the two-point conversion making the score 8-7 in favor of Jackson-Olin.

Helena had an opportunity at the end of the game to score down near the goal line but could not convert, and turned the ball over on downs. The Mustangs then hung on for the victory.

Parker admitted that the spring game is more about fundamentals and getting many guys playing time going into summer workouts.

“The biggest thing we’re trying to do is just trying to build an attitude of work because that’s the most important thing leading in to the summer,” said Parker.