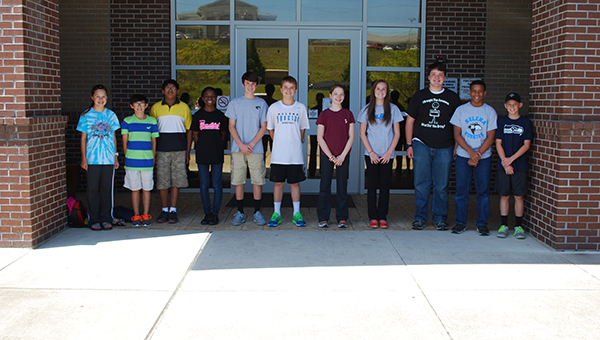 The new Helena Middle School ambassdors were recently selected as upcoming eight graders who will represent their school in the 2015-2016 school year. (Reporter Photo/Graham Brooks)

Thirteen Helena seventh graders were recently chosen to represent the school as ambassadors for the 2015-2016 school year.

They will also serve as student hosts and hostesses at a variety of school and community events,

Some of their duties include assisting with summer registration, attending other school related functions set by principal, to meet and greet distinguished guests, give tours of the school, assist with Camp Husky, work with other clubs and organizations and adhere to the rules of the school.

Helena Middle School Assistant Principal Jennifer Cofer said it is a high honor to be chosen as a HMS ambassador and students with high character and who are successful academically are chosen.

“They will represent the school for the entire year as eighth graders,” said Cofer. “They will assist incoming sixth graders at Camp Husky as well as helping out with a variety of events during the school year.”

Cofer is in her fourth year at HMS and also mentioned that one of her favorite things about the program is watching the students grow and mature.

“My favorite thing about it is just watching them grow as leaders and watching them do something great and growing into their roles.”