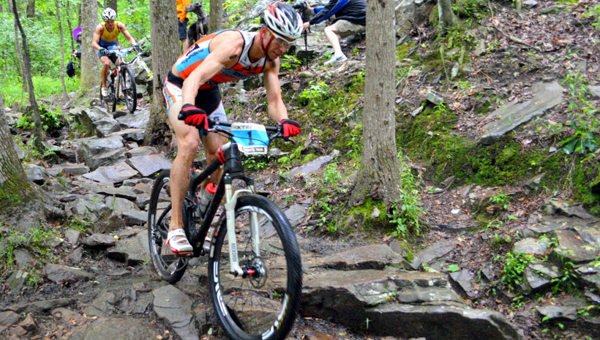 By MALIA KORTRIGHT / For the Reporter

PELHAM – Oak Mountain State Park hosted the 2015 X-TERRA Southeast Championship on Saturday, May 16. There were around 325 athletes competing in the triathlon, which consisted of swimming, cycling, and running throughout the park.

X-TERRA, a Honolulu based organization, has held the Southeast Championship at Oak Mountain for 10 consecutive years.

According to Kalei Waiwaiole, X-TERRA’s announcer, the event also doubled as the U.S. Triathlon Off-Road National Championship. The top 20 triathletes in each age group qualified for the world championship.

Lesley Paterson was the Women’s Pro Division winner, finishing in two hours, 23 minutes, and 13 seconds. Paterson, who hails from Sterling, Scotland, came out of the swimming portion in sixth place, and took the lead about a third of the way through the bicycle race.

Previously, she took a year off due to an injury and an illness. “It’s really good to be back and win the races,” Paterson said after the race.

The results of the Men’s Pro Division races were close, and Braden Currie came in first at two hours, 18 minutes, and 23 seconds, despite crashing his bicycle into a tree.

The 2015 X-TERRA Southeast Championship was the first triathlon in the U.S. that Currie has ever competed in. Currie is from the South Island of New Zealand and will be in Colorado for the duration of the summer.

Josiah Middaugh followed Currie at two hours, 18 minutes, and 29 seconds. He had won the races in the Men’s Pro Division for the past two years. Despite finishing in second place Middaugh said that he was, “happy with how [he] raced.”

“What happened today was a great race,” said Waiwaiole. “It’s been ten years out here, and we love it. It’s a beautiful place.”

(Contributed) FROM STAFF REPORTS ALABSTER – The Alabaster Rockets won the city championship for U8 girls softball, finishing with an... read more