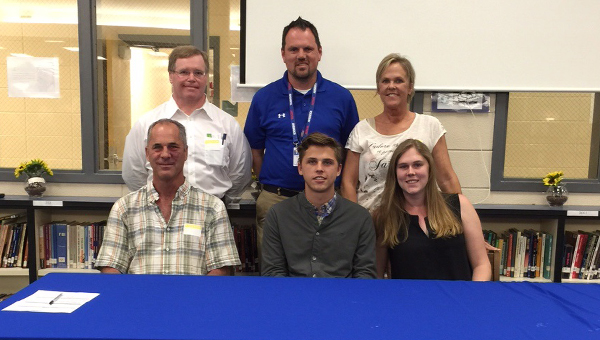 Chelsea senior midfielder Josh Bartlett signed a scholarship on May 6 to continue his soccer career at Itawamba Community College. (Contributed)

CHELSEA – Josh Bartlett leaves Chelsea as the all-time leader in tackles with 86 in his prestigious career. The senior captain earned first team All-Metro Birmingham honors in 2015, and was one of the few senior leaders on a young Chelsea team that went 9-11-1 this year.

On May 6, Bartlett signed a scholarship to continue playing soccer for Itawamba Community College.

“Josh has meant so much to our program over the years,” Chelsea head coach Wilee Miller said. “It’s funny how he has an easy-going personality off the field, but on the pitch, he’s tough, strong on the ball, and physical. He also has great field awareness, always making good choices. He’s great in the air, and he can play with both feet.  We will miss his leadership and his play on the field next year.”

Bartlett was not sure he wanted to play in college until recently. But, a soccer player for as long as he can remember, he just couldn’t justify not continuing his career.

“I’ve been playing soccer my whole life,” Bartlett said. “I guess I just realized that me not playing soccer would kind of be a disservice to myself.”

At Itawamba Community, Bartlett will have the opportunity to start right away, with three starting spots available at four midfield positions.

Itawamba Community is a junior college located in Fulton, Miss., and Bartlett only committed to going a few days prior to his signing.

“I decided three days before (I signed),” Bartlett said. “It’s one of the nicest junior college schools I’ve ever seen. And, eight of the players from last year are playing somewhere this year.”

For Bartlett, the ideal situation would be to earn a starting spot at his natural position of defensive center mid before eventually moving on to a four year school.

“It will just depend on how hard I work this summer,” Bartlett said, in reference to his chances to start right away.

The Helena Huskies and Jackson-Olin Mustangs met on Saturday, May 16, in a spring game that saw the Mustangs come... read more