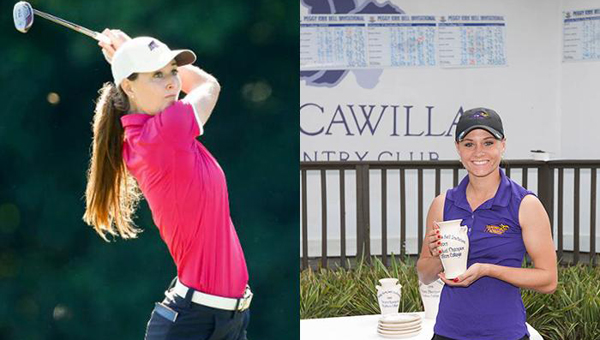 Wood, a Spanish Fort native, was named the Peach Belt Conference Player of the Year in women’s golf after posting a 74.8 stroke average in 23 rounds this season, which placed her second in the conference behind Eddy.

Wood finished runner-up in the conference tournament with a 3-over par 147 as she posted her fifth top-five finish of the season, which included her individual title at the Falcons’ Full Moon Invitational in September.

Eddy, a Hartselle native, claimed the Peach Belt Conference tournament individual title with her 5-under par 139. Eddy led the conference with a 73.9 stroke average in 15 rounds this season and captured three individual titles in the five tournaments she played in this year.

Wood and Eddy, who were named All-Peach Belt Conference selections while leading the Falcons to their first ever conference tournament title, finished tied for 16th overall in the NCAA Division II South Super Region tournament with identical scores of 10-over par 226.