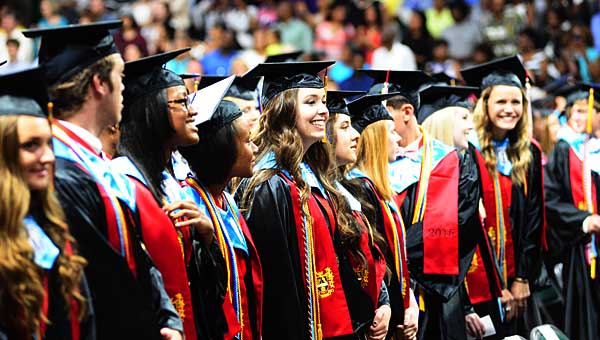 Thompson High School class of 2015 valedictorians smile as they await the start of the school’s graduation ceremony on May 19 at UAB’s Bartow Arena. (Reporter Photo/Neal Wagner)

ALABASTER – Former University of Alabama and NFL football standout Jeremiah Castille had a simple but powerful message for the Thompson High School class of 2015.

While sharing three words of encouragement – Love, dream and faith – with the 399-member graduating class at UAB’s Bartow Arena, Castille harped on the importance of forming a dream and working hard to make it come true.

“Focus on your dream and work on your daily goals to make your dream come true,” Castille told the class. “Graduates, be inspired by your dream and dream big. Don’t let anyone’s opinion steal the dream that God gave you.”

Castille served as the keynote speaker for the May 19 commencement ceremony, during which the members of the THS class of 2015 moved on to the next chapter in their lives.

For senior Class President Blake Lewis, the event was bittersweet, as he said he was happy to move on to adulthood, but was sad to leave his high school memories behind.

While addressing his classmates Lewis encouraged his peers to make a “Thompson difference” in the world.

“I want you to think: You are the difference,” Lewis said. “A special difference, a difference like no other, the Thompson difference.”

Ethan Sorrell, who had the highest grade-point average of all 2015 THS graduates, echoed Lewis’ sentiments.

“On this day, we cast aside our high school careers and accept the challenges that lie before us,” Sorrell said.

During the ceremony, the THS Junior ROTC presented the colors, Lydia Griffin led the Pledge of Allegiance, Ryan Nichols offered the invocation and the THS Madrigals choir performed the song “Gone.”

Moseley said the graduates will always have a community supporting them.

“I want to say thank you to you,” Moseley said. “This class has given this community some wonderful memories.”

“The real work begins right now,” Vickers, whose son was among the graduates, said. “The good news is you are prepared for it.”

A ribbon cutting ceremony was held on Tuesday, May 19, for It’s About Time Urgent Care in Helena. (Reporter Photo/Graham... read more