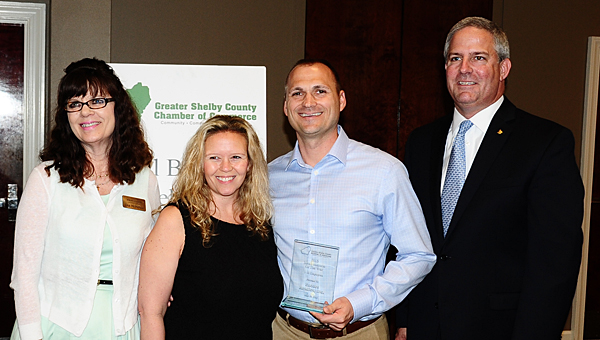 PELHAM – Companies in Alabaster, Pelham and Hoover were honored for their contributions to the county’s economy on May 20, as the four locally owned establishments were named Small Businesses of the Year.

The awards came during a Greater Shelby County Chamber of Commerce luncheon at the Pelham Civic Complex and Ice Arena. Thirty-three businesses from across Shelby County were nominated for the awards, and a panel of judges selected winners in four categories.

“We appreciate each and every one of you for choosing to do business in Shelby County,” said Lynn Ray, the vice chairperson of the GSCCC Small Business Work Group.

In Category I, which includes businesses employing between one and 10 people, Pelham’s Encore Resales on U.S. 31 was named the Small Business of the Year.

Mikey’s Grill off Valleydale Road in Hoover earned the Small Business of the Year award for Category II, which includes businesses with between 11 and 20 employees.

In Category III, which is for businesses with more than 21 employees, Vulcan Pest and Termite on Commerce Drive in Pelham won the Small Business of the Year award.

Before the Chamber presented the awards, Summer Classics Furniture co-CEO Dick Cross shared words of encouragement to the small business owners gathered at the Civic Complex.

“You are the heartbeat of America. You are where most people work,” Cross said.

Cross encouraged the business owners to take time to reflect on the direction of their companies a few times per week, and urged them to run their business with character, kindness, generosity, courtesy, humility, unselfishness, good humor, guilelessness and sincerity.

“What you do every day is the single biggest determinant of your success as a business,” Cross said. “Take 20 minutes three times a week and think about your business. Where is it today, where does it need to be and how are you going to get it there.”

Patrick Martin shot a 36-hole total of 133 at the AHSAA 7A state golf tournament in Mobile, beating the runner-up... read more