It’s worth it: Understanding and internalizing defeat 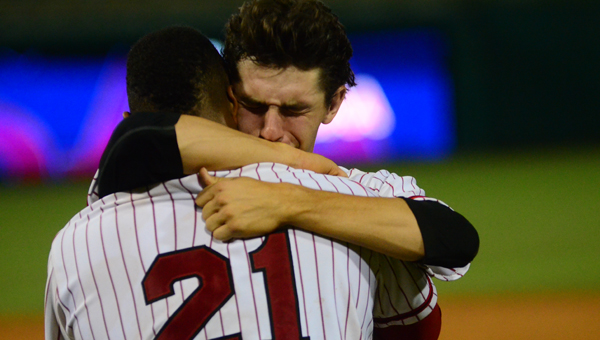 In the aftermath of a crushing loss, it helps to remember why we take part in competition at all. (Reporter Photo / Baker Ellis)

That wasn’t how this was supposed to go.

Three teams, all with variations of the same narrative, had a chance to end their seasons in a way that very, very few teams ever do; with a championship trophy held aloft. Three baseball teams from Shelby County made the trek to Montgomery, a feat in itself worthy of recognition, and three baseball teams came back empty-handed.

Helena, a first-year school with a first-year team, hovered around .500 for most of the regular season before catching lightning in a bottle on the way to the most improbable state finals appearance of the three.

Pelham, the school that begat Helena just some nine months ago, was the juggernaut. A team loaded with 13 seniors and high profile pitching, the Panthers only dropped one game in the first four rounds of the state tournament, winning each game by an average of six runs.

Thompson was the plodder. Exceptionally consistent, the Warriors knocked off the top two teams in class 7A in the first two rounds of the state tournament with proficient hitting and capable pitching, and seemed to be in the best position of the three in the state finals against an unranked team that seemed to be out of their depth.

The Huskies couldn’t hang with a bigger, stronger Russellville team and lost in two games. After knocking off second-ranked St. Paul’s in the semifinals, Helena seemed to just run out of gas. Pelham, the only team of the three to push its series to three games, committed five errors and gave up 22 hits in its two losses to top-ranked Cullman, not exactly a winning combination. Thompson simply ran into a buzz saw disguised as a throw pillow. The unranked boys from Smiths Station hit the Warrior pitchers into submission, winning the 7A state title in two games.

I know that, in the world of high school sports, we’re supposed to focus on the positives. Try to lift these kids up and make everyone feel like winners, no matter the outcome. They made it to the state finals. That should be good enough, right?

I was on the field after Pelham and Thomson lost. No one on those teams felt like what they had done was good enough. Because it wasn’t. Only one team in each classification has their season end the way they want, and none of these three teams were that fortunate. Coaches and players alike were experiencing the gut-wrenching sensation of simply not being good enough. In moments like this, we have to remind ourselves what, exactly, is the point of playing the game at all.

Sports are, at their core, the act of two groups of people doing something athletic, and one group doing it better than the other and subsequently being rewarded. No amount of participation trophies or encouraging words can mask the stark reality of losing. It’s the worst. Loss is synonymous with failure, and failure is never ideal.

Doc Rivers, the head coach of the Los Angeles Clippers, said something after his Clippers gave up a 3-1 series lead against the Houston Rockets and lost in seven games in the second round of the Western Conference playoffs, that is useful in this discussion.

“I told them I was a player for 13 years, and I had my heart broken for 13 straight years. I told them every night I prayed, every single night my only goal was to win a world championship. Every year I’d give my heart completely to the team, and every year it got completely broken. I told them it was worth it. I told them it’s so worth it to buy in and give yourself to a team, and this is part of sports, only one winner. But it’s worth giving yourself to the team. It’s worth getting your heart broken and taking all the criticism.”

Now, I don’t have any sort of affinity toward Doc Rivers. And I obviously understand there are intrinsic, very obvious differences between professional sports and high school sports. But the core of this message applies to all levels of competition.

In this culture, people rarely try their hardest. It’s so much easier to give minimal effort to something and, when it doesn’t work out, shrug and move on, because we didn’t really try. It is infinity times harder to commit to a thing, to truly sacrifice and give ourselves fully to anything, and still fail. That hurts a ton more. Effort breeds emotional attachment, and failure rips that emotion from us in the worst way.

But that is the whole freaking point. What’s the point of zombie-walking through life, never committing to anything? Where does that get us? I’ll tell you. Nowhere. These kids gave themselves, completely, to something greater than themselves. They sacrificed their time and effort and poured themselves into a team, because those teams represented all the best qualities of the individuals who comprised them. They fought and scraped and clawed to achieve something, and got really, really close. It’s worth getting your heart broken and coming up short because that act of sacrificing, of losing your identity in the identity of something greater, is what this is all about.

These kids can hold their heads up high and know they did something few people ever do, commit to something fully.

Thompson fell just short of the 7A state title, losing in the championship series to Smiths Station on May 16.... read more