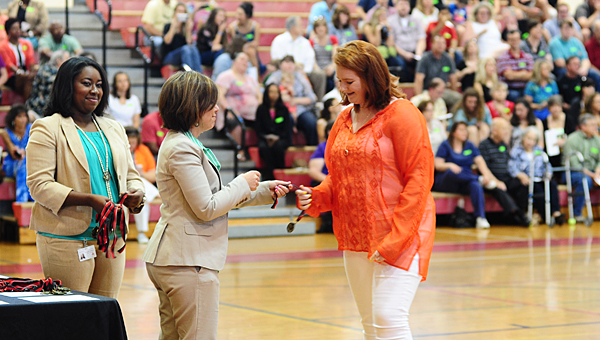 ALABASTER – Hundreds of Alabaster students were honored for their grades and involvement in extracurricular and community programs during a pair of May 20 honors day ceremonies at Thompson Middle School.

“Eighth-graders, I’m so proud of you, and I can’t wait to see what’s in store for you at Thompson High School,” TMS Principal Neely Woodley said during the eighth-grade ceremony in the school’s gym.

Woodley said TMS is wrapping up a “very successful school year,” and holds the ceremonies each year to celebrate student achievement.

“All of our students are great, but some have gone above and beyond, and we want to award them for their achievements,” Woodley said after the ceremony. “To have so many is thrilling to me. This was a large representation of the student body.

“We have amazing students,” Woodley added.

Among the honorees at the ceremonies were eighth-grader Heidy Hernandez and seventh-grader Jessica Shirley, who earned the highest grade-point averages for their respective grades.

Students also were recognized by the Cahaba Valley Elks Lodge, the David Lindsay Chapter of the Daughters of the American Revolution and the school’s English language arts, math, science and social studies departments.

“Students, I’m so proud of each and every one of you for a successful school year,” Woodley said.

The Pelham City Council agreed to build out the second floor of the city’s Water Administration Building to make room... read more