By MOLLIE BROWN / Special to the Reporter

On Aug. 1, 2014, a near-fatal car accident changed the lives of Brian Boyd and his family. 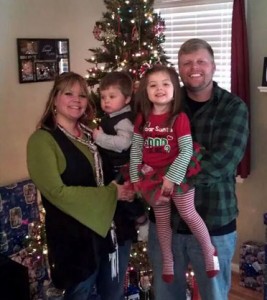 Brian was involved in the accident that led to a diffuse axonal brain injury, basically a severe brain injury that affected every part of his brain.

Nine months after the accident, Brian is in a minimally conscious state.

He is responding to commands, but it’s been a slow process.

Brian’s doctors and therapists are encouraged by his progress, but rehab facilities in the area have turned him down.

His wife Amber (nee White) has remained strong in her faith throughout this time.

She prayed for a door to open to a place that would say, “Yes we will fight for him just as much as you are.”

She contacted Dr. Paul Harch of New Orleans, La., who specializes in traumatic brain injury when she learned of his success rate using hyperbaric oxygen therapy.

Brian was accepted by the facility, however insurance doesn’t completely cover the costs involved.
A GoFundMe account (Gofundme.com/BrianHBOT) was created to raise money to cover pocket expenses.

A spaghetti dinner fundraiser will be held Friday, May 22, at Concord Baptist Church located at 11215 Highway 22, Calera from 5-9 p.m.

Eat-in or take-out plates will be available. Suggested plate donation is $15, but all donations are accepted and greatly appreciated.

“I don’t like asking for help, however I made a vow to my husband when we were married in sickness and in health, through good and bad,” Amber said. “I have to try every avenue available to help in his recovery. My kids need their dad, I need my husband, and our families desperately want him back.”

The Pelham Public Library has several programs lined up for children and teens this summer. (File) By JENNIFER BAILEY /... read more