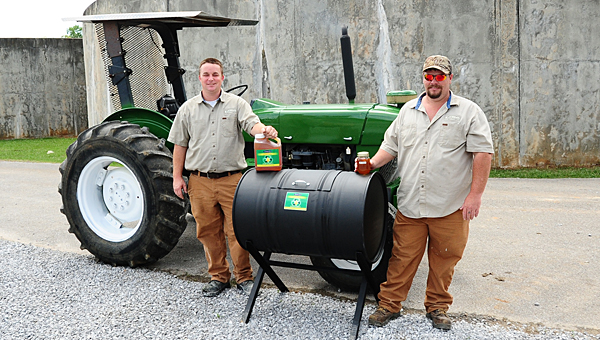 “When that thing cranked up, it was the best sound in the world,” Atkinson said with a smile, pointing to a large green tractor idling outside the city’s biodiesel building on May 20.

In March, the Alabaster City Council voted to purchase and install a BD65 Biodiesel Processor at Alabaster’s wastewater treatment plant, which is capable of transforming household and restaurant cooking grease into usable biodiesel fuel.

After collecting used cooking grease, Environmental Services employees place it into the processor, which heats the grease up to 115 degrees. Employees then add methanol and potassium hydroxide to the mix before the substance is filtered and eventually transformed into biodiesel.

On May 20, Atkinson, McCord and Environmental Services employee Adam Roper demonstrated the process for Alabaster City Council member Stacy Rakestraw, and praised the city for purchasing the equipment.

“We don’t want to make biodiesel, we want to make good biodiesel,” Atkinson said, noting the BD65 creates a “very clean” fuel. “The best part of this unit is that you can run three batches at once. We can make 450 gallons in an eight-hour day.”

“We’ve got proof of it outside,” McCord added, referencing the tractor.

After creating its first full batch of biodiesel in mid-May – For about 65 cents per gallon – the Environmental Services Department made sure all regular diesel had been drained from the tractor before filling it with biodiesel.

“You don’t have to modify the engine at all,” Atkinson said as the tractor hummed along. “We used it to Bush Hog the grass around the treatment plant the other day.”

The city also placed collection boxes at its three fire stations on May 21, where residents can drop off their used cooking grease.

“The limiting factor is how much grease we can get,” Atkinson said. “If we get enough grease, we’ve got a unit that can turn it out.”