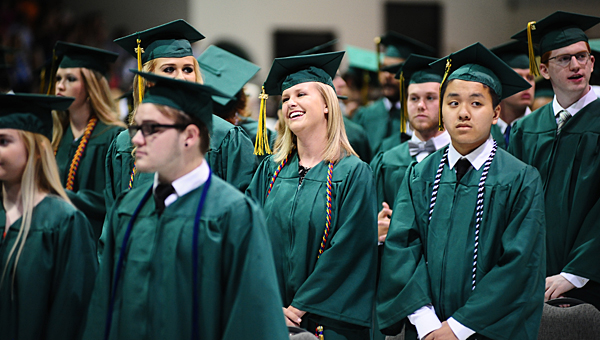 Pelham High School seniors await the start of the school’s graduation ceremony at the Pelham Civic Complex on May 21. (Reporter Photo/Neal Wagner)

PELHAM – Pelham High School 2015 class president Connor Atkisson was unsure how his senior year would be after his family moved into the city from Helena last year.

“Most of my great friends went to Helena (High School) after the split,” Atkisson said, referencing Pelham’s formation of its city school system last July and the opening of the new Helena High School in August 2014. “But you all embraced me.

“This year, I created a bond with you I will never forget. My senior year has been the best year of my life.”

Atkisson was among 266 other seniors who became the first graduating class of the Pelham City School System on May 21 at the Pelham Civic Complex. During his address to his peers, Atkisson praised the new school system.

“All these unforgettable memories were due in large part to us forming our own school system. The school split truly turned out to be a blessing,” Atkisson said. “Four memorable years, two different principals, one snowpocalypse and one family.”

During the ceremony, which packed out the Civic Complex main arena, the PHS senior ensemble sang the National Anthem and the school’s faculty choir sang the alma mater.

Jerry Garcia, who finished his school tenure with a 4.3 grade-point average, presented a message of encouragement to his classmates before the class walked across the stage for the last time as high school students.

“We share your pride as another group of young men and women reach this milestone,” Pelham School Superintendent Dr. Scott Coefield told parents.

PHS Principal Dr. Jason Yohn encouraged the graduates to take their own paths to success.

“After tonight, your future rests solely in your hands, and not in the hands of others,” Yohn said. “It is my hope that you will take the appropriate steps in your life to become a winner.”

Pelham Mayor Gary Waters shared the life story of President Theodore Roosevelt, explaining how Roosevelt became the first president to ride in an automobile and fly in a plane while writing 38 books, helping to build the Panama Canal and more.

“His first notable achievement didn’t come until he was 22 years old,” Waters said. “He accomplished all this in 38 years. What are you going to do?”