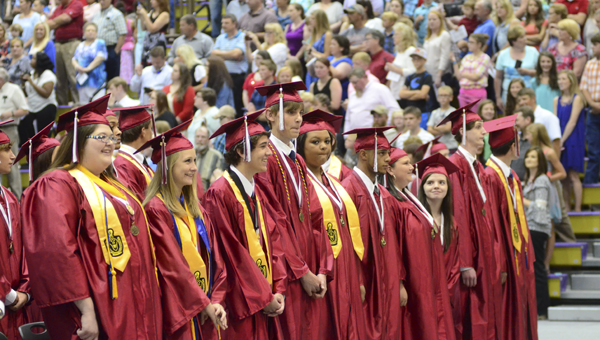 MONTEVALLO – Family members and friends of more than 100 Shelby County High School students packed the University of Montevallo’s McChesney Student Activity Center on May 21 for a graduation ceremony.

For students like Brookelynn Smith, SGA executive secretary and senior class representative, the evening was bittersweet in its finality of 141 students’ departure from high school.

“This is the last time we will be gathered in one place,” Smith said. She then read the following Dr. Seuss quote: “You have brains in your head. You have feet in your shoes. You can steer yourself any direction you choose. You’re on your own. And you know what you know. And you are the one who’ll decide where to go.”

Senior sponsor Anne Stansell announced Class of 2015 valedictorian Rebecca Tucker as this year’s recipient of the Johnson-Pope Award, “the highest honor bestowed upon a senior at Shelby County High School.”

In her remarks, Tucker encouraged her classmates to embrace their individuality and to make their own pathways in life.

“My message to you is to challenge yourself and to create your own paths to travel on,” Tucker said.

The SCHS Choir sang the National Anthem, followed by an invocation from Donnie Howard, youth minister at South Shelby Baptist Church in Shelby.

The SCHS Class of 2015 earned a total of about $1.65 million in scholarships.

Pelham High School seniors await the start of the school’s graduation ceremony at the Pelham Civic Complex on May 21.... read more