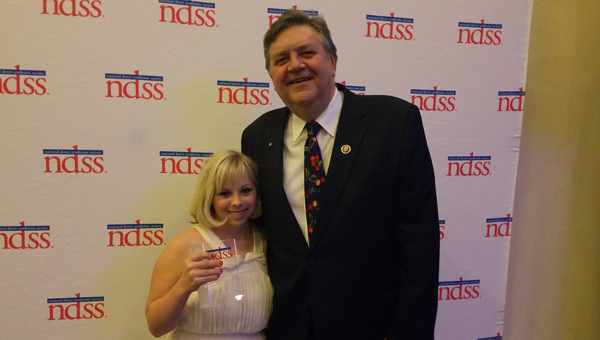 Shelby County resident Ashley DeRamus has been named the recipient of the National Down Syndrome Society’s Self-Advocate of the Year Champion of Change Award.

DeRamus, founder of the Ashley DeRamus Foundation, was presented the award by Rep. Dan Benishek, R-Michigan, at the Buddy Walk on Washington conference held on April 14 and 15 in Washington, D.C. More than 150 people from across the country gathered for this event to advocate for legislative priorities that positively impact the lives of people with Down syndrome and their families.

NDSS self-advocates are volunteers with Down syndrome who are committed to taking part in the democratic process, as well as serve as liaisons between NDSS and their communities. They work to continually raise awareness, educate and advocate for public policy solutions that benefit the Down syndrome community at the federal, local and community levels.

The Ashley DeRamus Foundation is a Birmingham-based charity founded for and dedicated to the education, advancement and quality lifestyle of children and adults with Down syndrome.

The Ashley DeRamus Foundation works to increase awareness and enlighten others about the positive contributions people with Down syndrome make to society. DeRamus’s goals for the foundation are to be an advocate and support programs for those with disabilities through fundraisers and education.

DeRamus, who has Down syndrome, also operates Ashley by Design, a clothing line tailored to fit women of many body types, including those with Down Syndrome. Ashley by Design is available online and at select retail locations.

More information about the Ashley DeRamus Foundation can be found at Ashleyderamusfoundation.org.