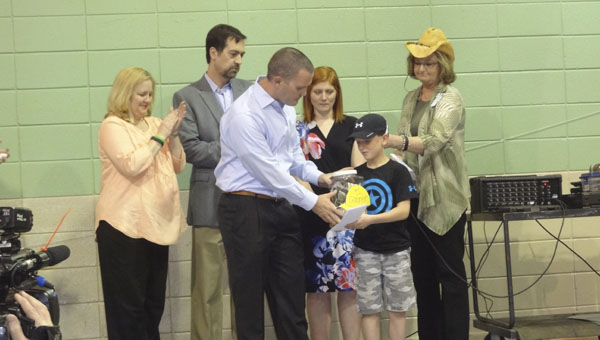 PELHAM – Eight-year-old Connor Herrero and his friend Connor Jacobs were looking forward to someday playing together on a playground suitable for all children.

Although Jacobs, who had cerebral palsy, passed away unexpectedly in May, Herrero decided to honor his friend’s memory by raising money for a project called Carly’s Clubhouse, an all-inclusive playground that would allow local special and non-special needs children to play together on equipment designed for a range of physical abilities.

In an assembly on May 21, Herrero presented Carly’s Clubhouse project organizer Dustin Chandler with more than $200 he collected at his school, Valley Intermediate, and Valley Elementary.

“We have got to provide in our community places where all kids can play,” Chandler said during the assembly. “In memory of Connor Jacobs, we are going to make that happen.”

Chandler understands the limitations special needs children face on a daily basis, whether they are at home, school or a regular playground. Chandler’s daughter, Carly, suffers from the rare neurological condition CDKL5.

“This is not about money. This is about two little boys’ story,” Chandler said of Herrero and Jacobs before the presentation. “It touches the heart. All they wanted to do is play together. This embodies the vision behind Carly’s Clubhouse – a place where all children can play.”

Jacobs’ and Herrero’s parents were present for the assembly, during which Herrero thanked his classmates for their support of the fundraiser.

“It just makes me very happy that I can do this,” Herrero said.

“I think it will be good for a bunch of kids,” Kristen Jacobs said of Carly’s Clubhouse. “We’re very proud of Connor Herrero. He’s a very special boy.”

Ashlea Herrero, Connor Herrero’s mother, said the two boys became friends as soon as they met about five years ago.

“The two Connors met a couple weeks before kindergarten and were just buddies ever since,” Ashlea Herrero said, noting the fundraiser was her son’s idea. “We talked to him about doing something good out of something bad. He came up with the idea to raise money for Carly’s Clubhouse.

“He knew that was a place he and Connor could play together. It means so much that the school was so supportive when he pitched the idea.”

Ashlea said $230 was raised at Valley Intermediate, and more money would be added from a “Caps for Connor” hat day fundraiser held at VES on May 21.

The goal was to raise as much as possible, “anything that he can give in Connor’s memory,” Ashlea said.

“I think Connor … set a wonderful example for us to follow,” VES Principal Deberah Miller said.

About 400 Oak Mountain High School students received their diplomas in a graduation ceremony at UAB’s Bartow Arena on May... read more