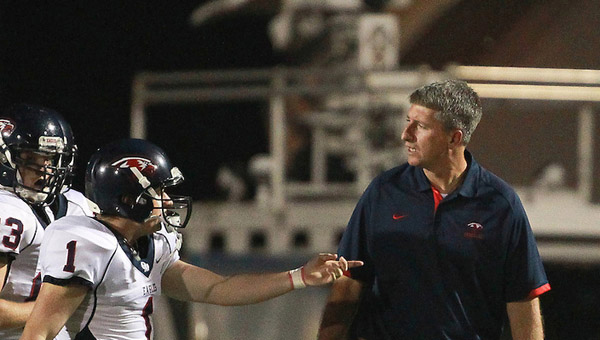 Oak Mountain head football coach Chris Bell and his Eagles will look to build off the success of their 10-2 campaign in 2014. (File)

Chris Bell is just happy that it’s not August yet.

The reigning 7A Coach of the Year and Oak Mountain head football coach is in the preliminary stages of starting another season, and is very familiar with the amount of work required in the summer leading up to a season to get ready for the fall. His Eagles traveled to Northridge on May 15 to play a spring game, and Bell had mixed reviews about the scrimmage.

“We didn’t play particularly well,” Bell said. “We shot ourselves in the foot too many times on both sides of the ball. We saw some good things, too. But we’re fortunate it’s May and not August or September yet.” The Eagles ended up tying Northridge 21-21.

Now, obviously these scrimmages are used as something of a barometer to measure how much work is left to do, but in the grand scheme of things, they mean next to nothing. They are a nice way for coaches to get an incredibly early snapshot of how players mesh in certain roles, and provide a reference point for the future. Nothing more.

However, Oak Mountain is losing a large chunk of productivity from last season’s surprising 10-2 campaign in one of the toughest regions in 7A comprised of Hoover, Spain Park, Vestavia Hills and Mountain Brook, just to name a few. From that 10-2 roster, Bell and the Eagles lost 23 to graduation, and a few more to transfers and the like. Oak Mountain will need to replace five starters on both sides of the ball, and will rely on some new faces to help lead the way.

While the Eagles will be young, they have a number of key returners on both sides of the ball that Bell and Oak Mountain will lean on heavily. Quarterback Warren Shader, as quarterbacks are supposed to do, will need to direct the offense. Justice Hammond will start at center for the third consecutive year and will continue to plug the middle of the line while wide out Reid Golson will be in his second year as a full-time starter and will need to help put points on the board.

On the defensive side of the ball, linebacker Josh Jones, safety Payton Youngblood, defensive end Avery Holsomback and cornerback Mitchell Jones will anchor the Eagles defense.

Coming off their 10-2 season, the Eagles are now on the radar of teams in the region in a new way. Time will tell what kind of product they will put on the field, but it isn’t a great idea to bet against the infrastructure Bell has put in place at Oak Mountain, who is out to prove 2014 was not a fluke.

Patrick Martin shot a 36-hole total of 133 at the AHSAA 7A state golf tournament in Mobile, beating the runner-up... read more