McCALLA – A 31-year-old Alabaster man is being held in the Tuscaloosa County Jail on bonds totaling more than $1 million after he allegedly attempted to sell methamphetamine before fleeing trying to run from officers.

According to the Tuscaloosa Police Department, Blake allegedly was in McCalla attempting to sell methamphetamine when Narcotics Task Force agents surrounded the suspect.

After Blake attempted to flee on his motorcycle, agents caught the suspect on foot and took him into custody after a struggle, according to the Tuscaloosa Police Department.

As of May 22, Blake was being held in the Tuscaloosa County Jail on bonds totaling $1.02 million. 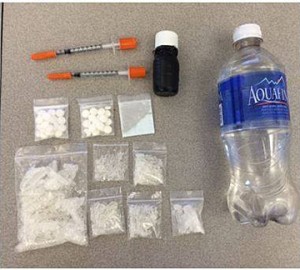 Agents allegedly confiscated these controlled substances from Christopher Blake on May 21. (Contributed)