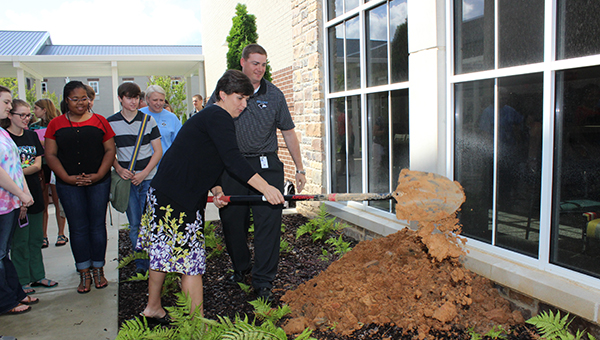 Helena High School Assistant Principal April Brand helps dig the hole where the time capsule was buried in the HHS courtyard on May 20. (Contributed)

According to SGA sponsor Cissy Johnson, after talking with the officers, the idea came up and was thought to be a great way to commemorate and remember the inaugural year of HHS.

They chose the courtyard because they felt the courtyard would be a nice place and also a place where they could make certain the time capsule remains secure and protected.

Newly appointed Principal April Brand contacted the necessary personnel to determine where irrigation lines were located and then some of the custodial staff dug the hole.

The SGA worked together with faculty and students to find things that represented this school year. Some of the things included in the time capsule were rosters of the freshman, sophomore, junior and senior classes; sports t-shirts for baseball, volleyball, basketball and soccer.

There was also a baseball hat, a tennis ball, photo of the softball area tournament team, a signed football from the first win of the season and a list of all the sports teams that represented the school in area playoffs.

Many of the departments also contributed various items such as band, choir, homecoming and science t-shirts. The band contributed several DVDS from the programs this year along with a winterguard medal when the team was crowned state and regional champions.

The foreign language department donated some letterhead with their logo on it while the art department contributed a paint brush.

Helena Mayor Mark Hall donated a variety of city items to include in the capsule. The organizers also added a copy of one of the first Helena City News magazines from this year along with a Sports Illustratedmagazine, a social media screenshot, the special education prom banner and a lunch menu.

To finish out the time capsule, a copy of the original alma mater for Helena High School was included.

Each item is sealed in a special bag or sleeve to help protect the item.  The container is then sealed for added moisture protection.  An engraved plaque will also be placed at the site and the plan is to open the time capsule 25 years from now to see how things might have changed with the school and student body.

Fifth graders show off talents at HIS