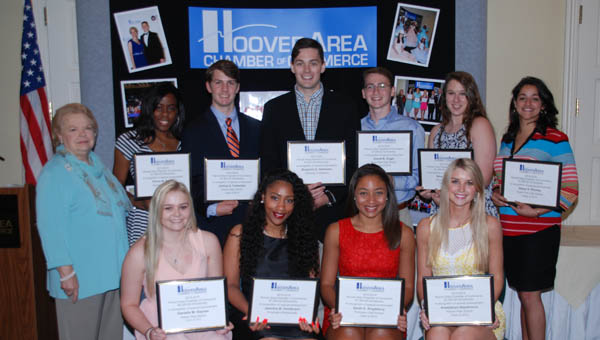 The Hoover Chamber of Commerce awarded $21,000 in scholarships to 13 students at a May 21 luncheon. (Contributed)

HOOVER—The Hoover Area Chamber of Commerce awarded the 2015-2016 Lila Parks Scholarships to 13 students, totaling $21,000, during the May 21 Chamber Luncheon.

The scholarships are restricted to public four-year colleges and universities located within the state of Alabama. Students applying can be from any of the area schools, including all public and private schools, but must be a Hoover resident, or at least one parent must be employed by the City of Hoover or a Hoover Chamber member.

Students can reapply in successive years for the scholarships offered by the Hoover Chamber.

Scholarship winners for the 2015-2016 school year included one student from Helena High School, one from Thompson High School in Alabaster, eight students from Hoover High School and three from Spain Park High School.

Helena High School’s recipient, Danielle Haynes, will attend the University of South Alabama and study to become a physician’s assistant.