COLUMBIANA – A 31-year-old Birmingham woman has been released from the Shelby County Jail on bonds totaling $20,000 after she allegedly distributed heroin at an Alabaster shopping center earlier this year. 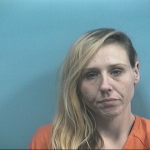 According to her arrest warrants, Sullivan allegedly distributed heroin and the painkiller Fentanyl in the 30 block of South Colonial Drive in Alabaster on Jan. 27.

As of May 26, Sullivan had no future court dates listed in Shelby County Circuit Court.