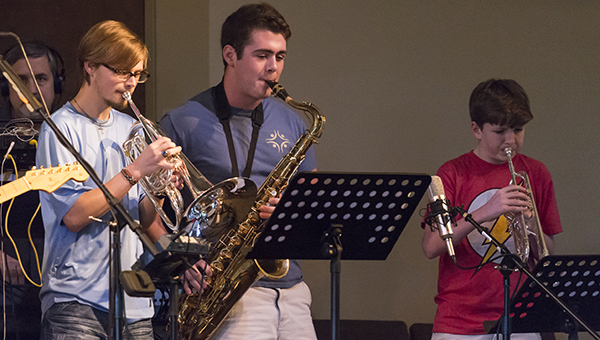 Left to right: Alex King of HHS, Ben Creel of PHS and John Miles Ratley of HMS all played some songs the night of the Music Cafe fundraiser event. (Contributed)

HELENA–Since 2011, the Praise Band at The Church at Cahaba Bend in Helena has hosted a Music Cafe to raise funds for various projects and worthy causes. This year, the event took place in mid-April and raised more than $3,300 for the Helena High School Band and the church’s Costa Rica Mission Team.

Whenever a new school opens, there are needs that go uncovered by school budgets, and making the Huskies band one of the beneficiaries provided an ideal way for Worship Leader Ben Williams and the members of the praise team to support this important program in Helena. The church congregation includes numerous band families, which made the $1,700 gift particularly memorable.

Since the church began foreign missions in 2013, this event has helped raise funds for that effort. Team members are responsible for raising the necessary funds to cover their expenses. The team is comprised of members of the church who feel called to foreign mission service.

This year’s group includes several individuals who traveled to Costa Rica in 2013, as well as others who will be going for the first time. They will depart in early June and will spend time in Costa Rica with other mission teams from around the United States who join together, often building schools and other facilities that are much needed by residents.

How does the Music Café work? Weeks ahead of the event, individuals can bid to have the band play the song or songs of their choice. The band begins rehearsing and learning new songs as needed. Some of the music includes Sunday morning favorites, but much of it is country and rock and roll, ranging from U2 to the Beatles.

The week of the event, the play list is closed and the donations are set. Before a song is played for its bid amount, audience members have the option to pay more for a song not to be played. A friendly “bidding war” of play or not play then begins that drives the donations up whether the song is heard or not. This year’s event featured Mark and Stephanie of WDJC’s “The Way Home” acting as emcees/bidding antagonists for two great causes.

In addition to the song bidding, funds are raised by a silent auction on donated items and services. Silent auction items vary from year to year, and may include everything from housekeeping, yard services, custom-made jewelry to football tickets.

Each year, those in attendance bring a snack or dessert to share, and all get to enjoy a great evening of fellowship and fun while supporting the community and missions.

The Church at Cahaba Bend is a United Methodist congregation located in Helena. For more information, visit Cahababend.org or on Facebook at Facebook.com/CahabaBend.