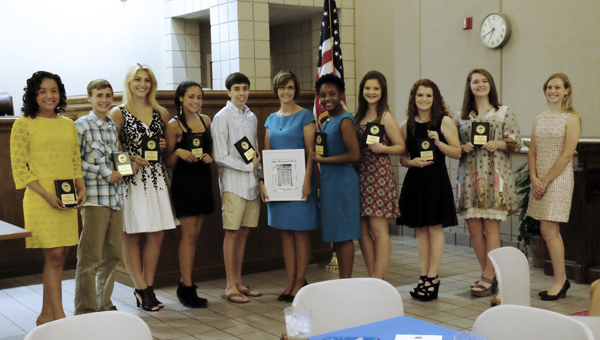 Members of the first Helena Teen Council were in agreement that the highlight of their first year activities was their daylong visit to Montgomery, where they toured the Capitol then attended sessions of the State House and Senate.

They visited National Registered Landmark, the First White House of the Confederacy in Alabama and 1861 residence of Jefferson Davis.

“That day began,” Kylie Woodman noted, “with our sponsor, Council President Cris Nelson and the city taking us all out for breakfast. We then took a bus to Montgomery where we sat in sessions of the House and Senate and heard about the bills they were discussing that day.”

The Helena Teen Council was recognized by the speakers in both chambers. As well, they were photographed with Young Boozer, Alabama State Treasurer, and Senator Cam Ward.

HHS Senior Kylie Woodman, who was inspired to form the first Helena Teen Council after writing an essay on the issue of teen involvement, scheduled the 13-member group in a series of activities designed to “promote volunteerism, leadership and knowledge of how the city is run.”

They first attended and were introduced at a local city council meeting and then toured the Helena Fire Department and met Helena’s K-9 Dog.

The final project of the Teen Council was recently installing permanent planted beds around the flagpole and parking lot areas at HHS.

At the May 14 celebratory dinner/graduation ceremony, each member was presented with a commemorative plaque.
Kylie Woodman informed the freshman and sophomore members of upcoming volunteer opportunities within Helena—such as helping with Movies in the Park and Helena Farmers Market.

Woodman also apprised them of Youth Leadership Shelby County, a six-month program offered to 11th grade students. Led by Mr. Kevin Morris, it encourages young people to be socially, conscientious leaders of the future by providing them with the experience, vision and opportunity to lead.

On Tuesday, May 19, members of the present Teen Council spoke to Helena Middle School eighth graders to advocate to upcoming freshmen taking advantage of this opportunity to learn more about their community and county.

Helen A. Duck at First Friday in May with, left to right, Stephanie LeSueur, Tracy Ensminger and Tammy Hogue. Here,... read more