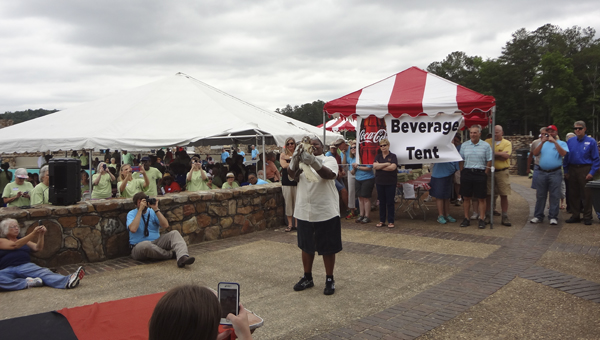 Volunteer Mary Lee prepares to release a red-tailed hawk from the Alabama Wildlife Center at the Shelby County Senior Picnic on May 21. (Reporter Photo/Emily Sparacino)

PELHAM – Dancing, games and a bird release kept hundreds of seniors busy at the annual Shelby County Senior Picnic at Oak Mountain State Park on May 21.

In celebration of Older Americans Month, local seniors were invited to partake in dancing, fishing, games, fellowship and lunch on the terrace.

Attendees also were exposed to various types of wildlife, including a young goat and a red-tailed hawk, which they watched being released after its stint at the Alabama Wildlife Center.

AWC Director of Education and Outreach Scottie Jackson said the hawk underwent rehabilitation after being hit by a car and was ready to be released into the wild at the picnic.

“This has been an amazing event,” Jackson said. “We love being able to be involved in great events like the Senior Picnic.”

Pelham Senior Center director Barbara Roberts said the event has grown over the years, and estimated about 700 people attended this year’s picnic.

“This is one of the best things that Shelby County does for the seniors every year,” Roberts said. “They always look forward to it.”

Senior centers in other cities around the county, including Columbiana, Alabaster, Pea Ridge and Calera, were represented, too.

“We’ve always come to the picnic,” Columbiana Senior Center manager Donna Higgins said, noting it affords seniors throughout the area an opportunity to visit with each other.

“This is the best place we’ve ever had one,” Ross said of OMSP.

Lane Vines with the Birmingham YMCA said community outreach is a significant part of what the Y does in fostering partnerships with local senior centers to further their activities.

“We are an extension of all senior centers,” Vines said. “This is our fourth year to attend (the picnic), and it’s just an excellent effort and program to see all these seniors together. We look forward to coming back next year.”

From the runway to the red carpet: Kristalize Boutique builds a name in fashion