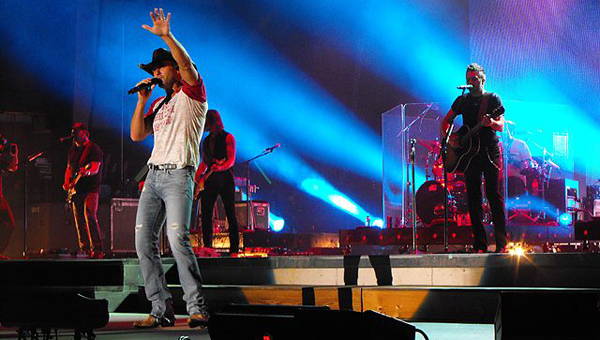 Tim McGraw, along with guests Billy Currington and Chase Bryant, will perform at the Pelham venue on Friday, Aug. 14 beginning at 7 p.m., according to the Amphitheatre’s Facebook page. The stop will be part of McGraw’s Shotgun Rider Tour.

McGraw has had 10 albums and 25 singles reach the top of the country music charts since he hit the airwaves in 1994. He has won three Grammy Awards, 14 Academy of Country Music Awards, 11 Country Music Association Awards, 10 American Music Awards and three People’s Choice Awards.

McGraw is the most recent addition to the popular Pelham music venue’s summer schedule.

On June 3, Train, The Fray and Matt Nathanson will rock the venue beginning at 7 p.m.

Hair metal fans will have a chance to see several icons of the genre on Saturday, June 27 when Def Leppard, Styx and Tesla take the stage beginning at 7 p.m.

Country music fans will be in for a treat on Saturday, July 18 as Dierks Bentley, Kip Moore, Maddie and Tae and Canaan Smith will rock the venue as part of their “Sounds of Summer” tour.

The country music flavor will continue on Friday, July 31 at 7 p.m. when Toby Keith and the Eli Young band take the stage.

Lady Antebellum, Hunter Hayes and Sam Hunt will round out the venue’s country offerings on Thursday, Sept. 3 at 7 p.m. as part of their Wheels Up tour.

Van Halen and guitarist Kenny Wayne Shepherd will visit the Amphitheatre when they take the stage beginning at 7 p.m. on Thursday, Sept. 17.

Indie rock band alt-J will round out the Amphitheatre’s 2015 schedule on Thursday, Oct. 8 when they take the stage at 7 p.m.

Man gets nearly 10 years in string of car break-ins

By NEAL WAGNER / Managing Editor COLUMBIANA – A 28-year-old Birmingham man will spend nearly a decade in prison and... read more