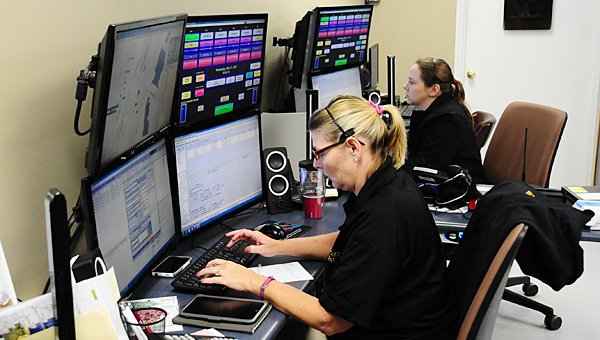 ALABASTER – The new use for the Alabaster Police Department’s former dispatch call center says volumes about the small amount of space the department had until about two weeks ago.

“What they had before was basically a closet. Actually, that’s what we turned it into – A closet,” Alabaster Police Chief Curtis Rigney said while looking at the much larger three-station dispatch room in the department’s expanded space on the morning of May 27. “It’s hard to believe now that they were able to work out of that space. But we made it work.”

Over the past several months, contractors – and even some of the police departments’ employees – worked to complete significant renovations to the old Alabaster City Hall building on U.S. 31. Rigney specifically praised officers Andrew Bryant and Josh White and Lt. Mike Jones for their contributions to the project.

Before the renovations were completed, the police department and its 85 employees worked out of the lower floor of the old City Hall building, which was built in the 1950s. Alabaster police now serve a population of more than 30,000 residents, which is exponentially more than the department served when it moved into the lower floor.

The total cost of the renovation project came in at about $90,000, which was lower than originally estimated. About $15,000 of the project was offset by a donation from the Shelby County 911 board.

Rigney said the department began using the renovated space in mid-May, and has been operating more efficiently as a result.

In the department’s old space, visitors had to crowd into a small lobby to pick up police reports or make a report. Those making a report had to walk past several offices and the city jail to get to the interview room.

Now, the lobby is much larger, and includes a service window for the records department and a television displaying instructions on making a police report and information on sex offenders in the city. The interview room is directly accessible from the lobby.

One of the biggest improvements came in the dispatch call center, where dispatchers now have three independently functioning consoles instead of the one used in the former call center.

The lower floor of the building is now used exclusively by the department’s corrections and patrol divisions, Rigney said.

“The workflow is much more conducive to what we need to do to be effective. It’s a more comfortable atmosphere for people who come in, too,” Rigney said. “We are very appreciative to have this.”

One injured in three-vehicle crash in Columbiana

By EMILY SPARACINO / Staff Writer COLUMBIANA – One person was injured in a three-vehicle wreck in Columbiana the morning... read more