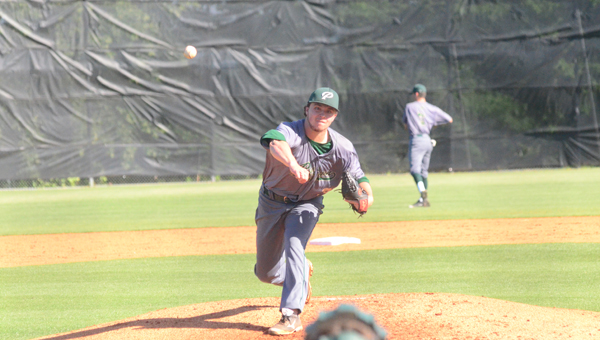 Pelham senior Sam Finnerty is the baseball Player of the Year in Shelby County. Finnerty finished the season with a 10-2 pitching record in 83.1 innings of work. He also struck out 82 batters and finished the year with an ERA of 0.76. He also hit .421 at the plate, had 32 RBIs, smacked five home runs and had a .676 slugging percentage. (File)

Before we completely shut the book on the 2015 spring sports season and move into the sports doldrums that are June and July, we need to take a look at the kids who made this spring special on the pitch and the diamond. We have nominated at least a Player of the Year, a Coach of the Year, a first team, and honorable mentions for baseball, softball and boys and girls soccer, and have nominated a second team where possible. This week we are rolling out the baseball and the softball lists, and next week we will take a look at the soccer nominations. Here are the baseball nominations for All-Shelby County.

Trying to pick an MVP or a Player of the Year or a Most Outstanding Player or any other variation of the same idea is ironically subjective. The name(s) of these awards suggest the decision reached is concrete, certain and without hesitation, but, of course that is not always the case. The debate concerning what type of player should win an award like this is far-reaching. Should it be given to the best player on the best team? Or should it be given to the player who singlehandedly takes his less-talented team on a deep postseason run? Or should it be given to the player whose team would suffer the most if he was replaced with a player of average ability? This isn’t always an easy question to work through, which is why it is so great when an overwhelmingly obvious choice is available.

There’s only one option here. This award goes to Sam Finnerty 100 times out of 100 this season; by whatever criteria you can muster. Statistics obviously don’t tell the whole story, but they sure do help, and Finnerty’s are shouting from a mountaintop. Finnerty, a current Alabama commit, threw 83.1 innings in 2015 over 15 games. That’s insane. What makes this even crazier is he gave up just seven earned runs all year. Seven! He had 83 strikeouts on the season and went 10-2 as a starter and also had one save. His ERA, after facing 310 batters, was 0.76. No one else who was even in the ballpark of his inning total (very few) had an ERA that came close to sniffing one that low. The kid can just flat out pitch.

But, in a strange twist of fate, Finnerty wasn’t even the far-and-away best pitcher on his own team. Connor Radcliff, a Samford University commit, had pitching stats virtually identical to Finnerty’s in a number of categories. What separates Finnerty is his ability to not only control the game from the mound, but also from the plate. He hit .421 from the plate in 145 at-bats, drove in 32 runs, smacked five home runs and had a .676 slugging percentage to boot. Player of the Year. Sam Finnerty.

A year ago, the school didn’t even exist. This year, the Huskies were two games away from being crowned 5A state champions. Helena, which split from Pelham at the beginning of the 2014-15 school year, was a talented team but went through a few dry spells this season. Guy’s Huskies lost the second game of a doubleheader on Feb. 28 and did not win again until March 14, seven long games later. From there they hovered around .500 for most of the regular season before turning in one of the most inspiring tournament runs this season. Entering the state tournament with an 18-15 record, the Huskies went on a tear through Class 5A, which included back-to-back wins over No. 2 St. Paul’s in the state semifinals. Guy took a team in its first season and led them to within one two-game stint of hoisting a state title.

Note. Not all teams/ coaches responded when asked for players to consider.