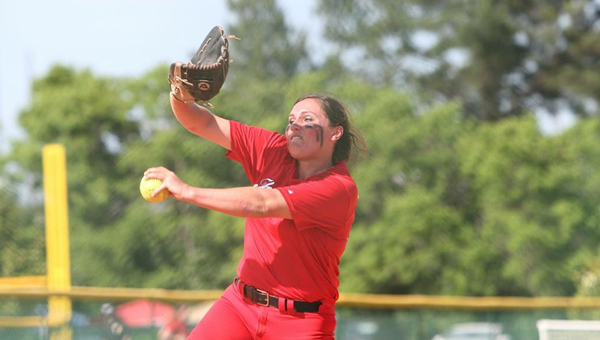 Thompson senior Haley Crumpton is the softball Player of the Year in Shelby County. Crumpton threw 295 innings her senior season, struck out 432 batters and amassed a 32-14 record while maintaining an ERA of 0.90. She also hit .424 from the plate in 2015. (Contributed)

Before we completely shut the book on the 2015 spring sports season and move into the sports doldrums that are June and July, we need to take a look at the kids who made this spring special on the pitch and the diamond. We have nominated at least a Player of the Year, a Coach of the Year, a first team, and honorable mentions for baseball, softball and boys and girls soccer, and have nominated a second team where possible. This week we are rolling out the baseball and the softball lists, and next week we will take a look at the soccer nominations. Here are the softball nominations for All-Shelby County.

The softball selection, like the baseball selection, is incredibly anticlimactic. This award goes to Haley Crumpton without a moment’s hesitation. The University of Mobile commit is a glitch in the system, a workhorse on a level rarely, if ever seen before in the county or the state. Her numbers are so eye-popping, so ridiculously above what her peers have done that they seem laughably fake. But they are real, oh so very real.

For her high school career, Crumpton’s win-loss record is 77-35-2. She threw 747 total innings and finished her career with 979 career strikeouts and a 1.16 ERA. There aren’t even any adjectives to put in front of those numbers to accurately express that kind of production. But, this isn’t a lifetime achievement award; this is an award for the 2015 season, not a way to celebrate an entire career. Well, don’t worry; Crumpton has that market cornered as well.

Thompson played 51 games in 2015. Crumpton pitched 46 of them. She finished the 2015 season with a 32-14 record and a 0.90 ERA. She threw 295 innings her senior season and kept her ERA under one. Wow. She also recorded 432 strikeouts in her senior season. Also, just as an added cherry on top, she had a .424 batting average this season, which was down from her .540 batting average as a junior. She finished her career from the plate with a .446 batting average and also registered 20 home runs in her career as well. This was never even a contest.

The Lady Hornets were one of the top contenders all season in Class 6A with McCartey at the helm. Chelsea was the number one seed coming out of the 6A North Central region, and won the first game of the 6A tournament before falling to eventual 6A runner-up Southside Gadsden and Pelham in successive games. The Lady Hornets were just one of two teams in the county to win a game in the state playoffs, and were the only team in the county to win their regional qualifier outright.

Chelsea started the season losing six of their first nine. They did not get to two games above .500 until a March 25 victory over Thompson and slowly turned into a team few wanted to face down the stretch. The Lady Hornets played some of their best softball at the right time of the season under McCartey, who used young pitcher Sarah Cespedes often as Chelsea made the second-deepest playoff run of any team in the county.

Note. Not all teams/ coaches responded when asked for players to consider.

By BAKER ELLIS / Sports Editor The following is a comprehensive list, by classification, of all Shelby County athletes who... read more