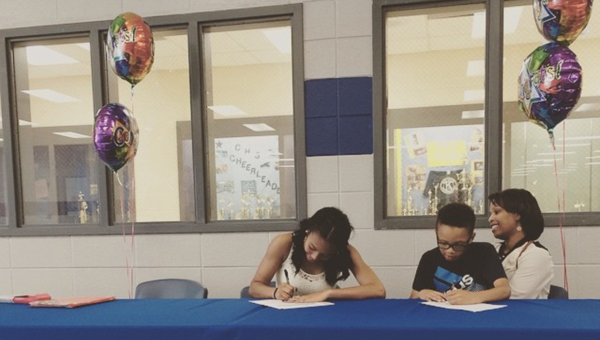 For most of her senior spring semester, Destinee Benton had accepted the fact she was not going to play the game she loved in college. A year-round volleyball player since the sixth grade, Benton played for her school team at Chelsea in the fall, and then played club ball all through the spring and summer until the school season started again, and continued this pattern for most of her high school career. She spent most of her time with the Lady Hornets as a middle blocker, but became something of a shape-shifter late in her career, playing a number of different positions.

After her senior school season ended, she learned she would be unable to play for her club team for the first time since entering high school. She tried out for a few college teams anyway, but soon all but gave up her dream of playing volleyball in college.

“I went to a few college try outs (after the school season ended),” Benton said in a May 28 phone interview. “But by the end of January I hadn’t heard anything from any coach. I gave up and didn’t think I was going to play. I thought, ‘maybe this isn’t God’s plan, maybe I need a break.’ I was going to enjoy college. Deep down I was still upset, but I made my peace with it.”

As her senior semester wound down, Benton planned to attend the University of Alabama. Then, in the first part of May, she got an email from a small NAIA school in Mount Vernon, Ga. called Brewton-Parker College asking her to come try out and potentially earn a scholarship.

“At first I thought it was a spam email,” Benton said. “But then they reached out to my dad. He told me I should try it.”

Benton made the five-hour trip across the state of Georgia to try out for a program and a team she did not know much about, and immediately felt at home.

“Right when I walked in they were so welcoming and so much fun,” Benton said. “I felt a bond with them.”

Benton earned a scholarship right after her tryout, and accepted it on the spot. The school has a JV program and a varsity program, and Benton will join the varsity team in her freshman season. She will report to school Aug. 1.