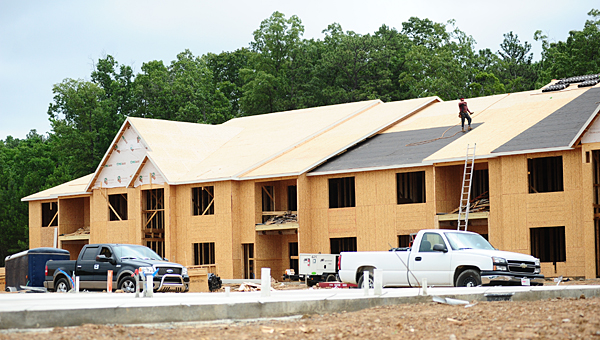 Construction crews work to build to the new Grand Reserve apartment complex off Huntley Parkway in Pelham on May 27. (Reporter Photo/Neal Wagner)

PELHAM – Construction crews are on track to have a 184-unit apartment complex off Huntley Parkway completed by the end of the year, and an upgrade to the Interstate 65 northbound on-ramp on Shelby County 52 likely will be completed in the next few months, according to city leaders.

Crews currently are working to construct the Grand Reserve luxury apartment complex off Huntley Parkway next to the Publix shopping center, and likely will have the development completed by the end of the year. On May 27, several of the complex’s structures had already been erected, and land had been cleared to accommodate other buildings.

Once completed, the multi-building apartment complex will feature 184 units, and will offer one-, two- and three-bedroom units and duplexes, according to the development’s website, Grandreservepelham.com.

The apartments will range in price from $880 per month for one-bedroom units to $1,150 for three-bedroom and $1,360 for duplexes, respectively.

In mid-2014, the Pelham City Council agreed to rezone the about 18 acres off Huntley Parkway to accommodate the apartment development. The land previously was zoned for townhomes.

During a May 27 interview, Pelham City Council President Rick Hayes said the apartment development likely will generate less traffic on Huntley Parkway than the originally planned townhome development, according to traffic engineering studies.

To help combat morning rush hour traffic congestion on Shelby County 52 and Huntley Parkway, the apartment complex developer and the city are partnering to add an additional lane to the northbound on-ramp on I-65 exit 242.

“That should keep traffic moving a lot quicker,” Hayes said. “We are waiting for the final approval on that. Hopefully, we can get that completed this summer before school starts again.”