A view from above: Man catches unique perspective of BCF duck race 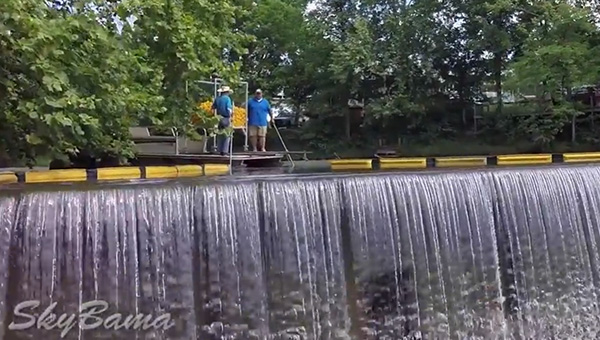 Kevin Henderson got some rare and cool footage of the Buck Creek Festival duck race with his drone. The video can be seen on YouTube. (Contributed)

HELENA–As thousands of people gathered at the Buck Creek dam for the famous Buck Creek Festival Duck Race, Kevin Henderson had another plan in mind to get some unique footage of the popular race.

Henderson, an Alabaster resident, has been using his DJI Phantom 2 drone for about a year-and-a-half to capture some unique footage at different events and then making YouTube videos using the footage.

“I’ve always been into aviation and have flown smaller model air crafts,” said Henderson. “I bought a drone about a year-and-a-half ago and started filming the snow storm and that’s how I got into it.”

Henderson does IT work and whenever he is traveling in the car he likes to bring his drone with him just in case he were to see something to film.

Henderson had never been to the actual duck race before, but he had heard a lot about it and wanted to get out in the crowd and get some good footage.

What resulted was a near two-minute video of the drone flying over the waterfall and capturing various shots of the duck dumper, crowd, duck wranglers and the actual race itself.

When asked if he was scared about flying his drone over water or near trees, Henderson shrugged it off and admitted he has lost a drone in the ocean before but said you have to take risks in order to get good shots.

“I like getting down low and close up shots and I’m like well if it sinks it sinks,” said Henderson. “I’m here to get good footage.”

Henderson admitted that it does get tricky sometimes flying around trees or objects, but one of his favorite shots was when he filmed his drone circling a cross on top of a church in Cullman during a snow storm a few months back.

“I really enjoy shooting things with fun energy and just fun events,” said Henderson. “I hope to keep improving my video skills and editing and just keep having a good time with it.”

By NEAL WAGNER / Managing Editor ALABASTER – A 26-year-old Alabaster man is facing up to 20 years in prison... read more