Event honors those who serve America 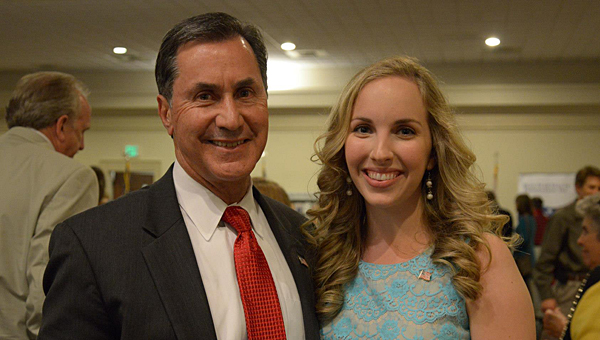 Rachel Rivers, founder of Support Our Soldiers Alabama, with Congressman Gary Palmer during the May 28 event. (Contributed)

HOOVER – On Thursday, May 28, Support Our Soldiers Alabama hosted its fourth-annual Memorial Day Dinner at Briarwood Presbyterian Church in Hoover.

Support Our Soldiers Alabama is a non-profit organization that was started by Shelby County residents Dr. and Mrs. Thomas (Charon) Rivers, Sr. after the death of their son, Lance Cpl. Thomas Rivers, Jr., who was killed in action in Afghanistan on April 28, 2010.

The mission statement of Support Our Soldiers Alabama is “Supporting those who are serving, who have served, and honoring those who gave the ultimate sacrifice.”

The organization has sent 650 care packages to soldiers who are serving overseas.

They have also donated seven track wheelchairs, which are wheelchairs with rubber tracks that allow for mobility on any type of terrain, to veterans.

The guest speaker at the Memorial Day Dinner was U.S. Congressman, Gary Palmer. Palmer has known the Rivers family for several years.

“Thousands of people turned out to honor that young man” when the funeral procession went from Briarwood Presbyterian Church in Hoover to Alabama National Cemetery in Montevallo, Palmer said.

As the family and friends made their way to the Alabama National Cemetery, all of the interstate overpasses and Alabama 119 in Alabaster were all lined with people holding American flags. “It gave me hope,” Palmer said.

“No soldier really dies alone,” Palmer said. He added that when the soldier dies, a little part of their family and friends dies too.

The music for the night was provided by Homeland. They opened the night with the tribute to the soldiers. They sang a verse from the songs of each branch and asked any who have server or are serving to stand and be recognized.

This year, the Memorial Day Dinner raised more than $10,000 for Support Our Soldiers Alabama. The “banquet was a big success,” Charon Rivers wrote in an email.

For more information on how you can help Support Our Soldiers Alabama, visit Supportoursoldiersalabama.org.

A view from above: Man catches unique perspective of BCF duck race

Kevin Henderson got some rare and cool footage of the Buck Creek Festival duck race with his drone. The video... read more