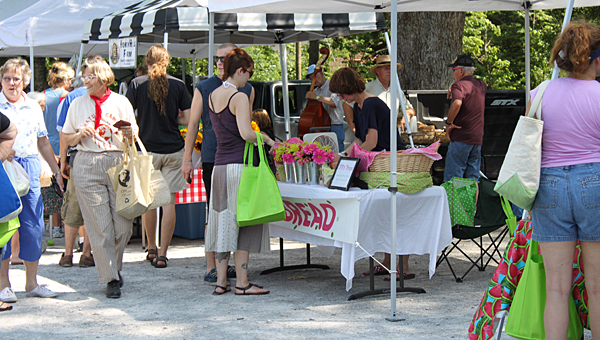 Farmers’ markets will be in full-swing in Shelby County over the next few months. (File)

With summer fast approaching, farmers’ markets are beginning to open throughout Shelby County.

The Columbiana Farmers Market is located on West College Street, behind the courthouse. They open Saturdays from 8 a.m. or 9 a.m. until whenever the produce runs out.

The vendors offer several different types of produce including strawberries, watermelon, cantaloupe, tomatoes and onions. Soon they will also have blueberries, squash and corn.

“We sell what we eat,’’ Glenn said, noting all of the vendors taste all of their products before they sell them. “If they wouldn’t eat them, they aren’t going to sell them.”

The amount of produce is limited because, there are only two or three vendors that are at the farmers market regularly.

Another local farmers market is Helena Market Days located at the Helena Amphitheater on Saturdays between 8 a.m. and noon starting June 6.

The market relies heavily on volunteer help. Ron Holly, one of the markets directors, and the volunteers arrive at the Helena Amphitheater between 5:30 a.m. and 6 a.m. to set up tents and tables. They also stay after the farmers market ends to break down what they set up that morning.

Currently Helena Market Days has six farmers and even some non-farmers committed to booths. The vendors at Helena Market Days offer a little bit of everything including tomatoes, peaches, beans and squash. Watermelon, blueberries and strawberries will be available later in the summer.

Holly said that Helena Market Days has grown a little each year. They have musicians that come out and play for an hour or two at a time and chef demonstrations. They also have several events planned such as a barbecue cook-off, a Boy Scout cook-off and a peach and ice cream bake.

Farmers markets are growing in popularity. Holly said that he thought that it was because “people want to know where their produce comes from.

The following are farmers’ markets in Shelby County:

Open May through August

From left to right: Angelo Petite, Nick Anglin and Chris Williamson are co-owners of Alabama Turf Works. The company will... read more