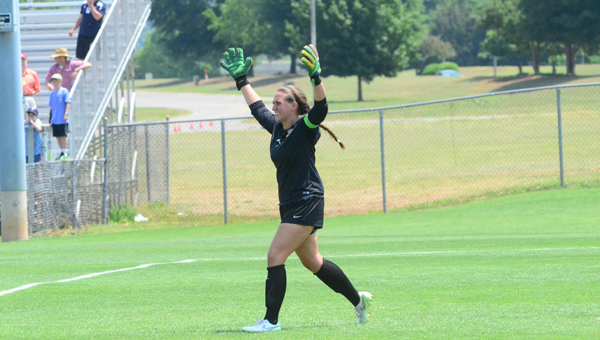 Oak Mountain senior goalkeeper Katie Denny was the anchor on a historically good Lady Eagles defense that only surrendered six goals all season on their way to a 7A state championship. Twice in the 7A state playoffs Oak Mountain had to resort to penalty kicks, and twice Denny led the Lady Eagles to a win. (File)

After all the games had been played and the trophies had been divvied out, seven girls soccer programs in Shelby County made the end of the season top-10 rankings in their respective classifications, per Eurosportscoreboard.com. There was good soccer played by a number of girls programs this spring, and now it is time to recognize those players who made this season special. Here are the All-County nominations for girls soccer.

Goalies can go entire games and see little to no action. Rarely used, often forgotten about in the flow of the game, the only time goalies see any action is always a moment of panic. Keepers lead a solitary, pressure-packed life. They are the last line of defense, the failsafe when all else goes wrong. A good keeper can make any team competitive, while a mediocre or bad one can trip up a good team and bring them to a less competitive level and a great keeper can take an already strong team to historic heights.

Enter Katie Denny, the defensive stalwart for the Oak Mountain Lady Eagles. Oak Mountain was the best team in the state all season regardless of classification, a well-oiled machine of destruction, and Denny was a vital cog in that machine. The 7A Final Four MVP, Denny was the last line of defense for a historically good defense that only relinquished 6 goals all season, a state record. With Denny in goal, the Lady Eagles relinquished just 0.2 goals per game, an average of one goal allowed per five games played. Simply put, people just didn’t score on Denny.

On top of the raw numbers and data, Denny faced the nightmare scenario for a keeper, penalty kicks in a playoff game, twice, and came out ahead, twice. Against Vestavia in Oak Mountain’s second round playoff game, the Lady Rebels and the Lady Eagles needed 13 nerve-wracking rounds of penalty kicks to determine a winner before Denny and Oak Mountain emerged victorious. Then, just a week later in the 7A championship game, Denny again found herself in goal facing another round of penalty kicks, this time with the blue map trophy on the line. After allowing the first kick to squeak past her, Denny denied the next three attempts to lock up the 7A state title, her third since her freshman year. A number of players had strong arguments for this award, but Denny’s claim could not be denied, and she is the Player of the Year for Shelby County.

Again, this could have gone to a few coaches. However, few could have predicted the year that the Calera Lady Eagles would have under Leif Milliron. With a 6-7 record just a year ago, the expectations for this Calera group were understandably tempered. However, under Milliron the Lady Eagles put together the best season in school history, and came close to sniffing a state championship. Calera had a mediocre regular season, finishing 7-5 but with a 4-0 record in Area 7 of 4A/5A competition. Then, the Lady Eagles caught fire. On a team with no true superstar, Calera won its first three games of the 4A/5A playoffs by a combined score of 27-2 to earn a bid to the Final Four, the first in school history. In the state semifinals, the Lady Eagles mounted a valiant fight against 4A/5A No. 2 St. Paul’s, but fell 3-1. Under Coach Milliron’s direction, Calera built off a mediocre 2014 season and turned in the best year in school history to date.