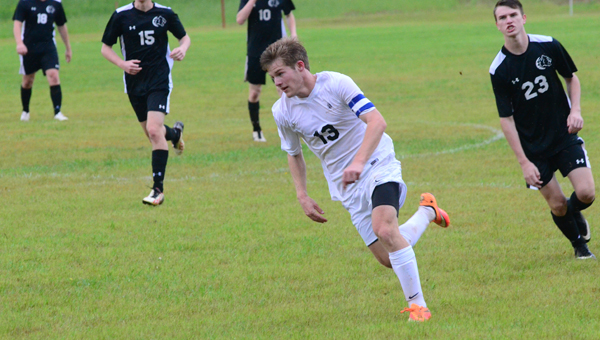 Westminster School at Oak Mountain’s Jack Stein scored 35 goals and accumulated 28 assists as well in 2015. Stein led an offense that averaged 4.9 goals per game to the 1A-3A state championship and is the Player of the Year in Shelby County. (File)

Soccer was good to Shelby County in 2015. With two boys state champions and one girls state champion, Shelby County captured 38 percent of all possible soccer state championships, the most of any county in the state. That statistic can be somewhat misleading, however, and can give the perception that only a few top schools had good seasons. That is not the case. There was a Shelby County team in each classification for the boys Final Four, as well as two for the girls, and a plethora of teams spent large chunks of the season ranked in the top 10 of their respective classes.

All of that to say there is a lot of talent concentrated in the county for soccer, and this is the time to recognize that talent. We have nominated a Player of the Year, a Coach of the Year, a first team, a second team and honorable mentions for both boys and girls soccer. Here are the nominations for the boys for All-Shelby County.

This one is tricky. Soccer cannot rely on as much hard data as baseball can to paint a full picture of a player’s impact. Data and numbers play a role, of course, but a player can affect a soccer game in a myriad of ways that will not end up in the box score. This makes it tough to determine which one player had a greater impact than another. In high school baseball, pitching wins games; therefore good pitchers are valued higher. A mediocre team can ride one ace in the playoffs and make a run. In soccer, goal-scorers are just as important as goal-stoppers, and the differences in impact between the upper-tier players can be miniscule.

That being said, Westminster School at Oak Mountain’s Jack Stein had himself a year. With 35 goals and 28 assists in his senior campaign with the Knights, Stein led Westminster to the 1A-3A state championship and is the Player of the Year in Shelby County.

What Stein lacked in size, he made up for in technical skill, raw speed and heart. A natural leader, Stein orchestrated one of the most efficient offenses in any classification in the state to a 16-1-2 record. A remarkably talented team for such a small school, Westminster held their own all season against 6A and 7A schools, and Stein was the main reason why. Averaging 1.8 goals and 1.3 assists per game, he was a threat to score whenever the ball was at his feet.

The Helena boys had a great spring all the way around. The baseball team made an improbable run through the 5A ranks and made it to the state championship series. The soccer Huskies were in the same boat, entering the 4A/5A state playoffs with an 11-7-3 record before bulldozing their way to the Final Four via three straight wins by a combined score of 17-0. It’s been harped on before, but for a first-year program to come together and compete for a state championship is incredible. It is obviously a testament to the players on that team for figuring out how to play together on the fly, and to the coach for putting those players in the right positions to be successful. Morgan took a program that did not exist a year ago and took them within two games of a state championship and a season-ending No. 3 rank in class 4A/5A.

The Lady Eagles of Oak Mountain won their second-straight state title and held their opponents to an incredible 0.2 goals... read more