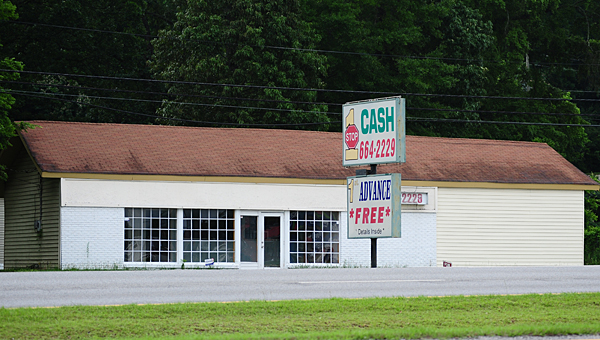 Pelham may extend its moratorium on businesses such as title pawn, cash advance and pawn shops during a June 15 meeting. (Reporter Photo/Neal Wagner)

PELHAM – The Pelham City Council is considering a one-year extension on the city’s moratorium on several types of businesses in the city, and likely will vote on the matter during a mid-June meeting.

City Council President Rick Hayes briefly discussed the matter during a June 1 pre-meeting work session, and said the council was not prepared to vote on the moratorium extension during the meeting.

“We need to finish our studies … instead of not doing all we need to make an informed decision on this,” Hayes said. “The next (June 15) meeting will be right at a year since we passed the moratorium.”

The approval of the moratorium came in response to concerns raised by Pelham residents, council members Ron Scott and Maurice Mercer said previously.

During a May 19 work session, council members suggested extending the moratorium by one year rather than making it permanent “until such time the council decides to change it,” according to the meeting’s minutes.

Scott said the moratorium could help to attract more commercial development to the city.

“He stated the perception of the (U.S.) 31 corridor to commercial developers is negative, and suggests a demographic view that would not support the type of retail and commercial businesses we are seeking to locate in Pelham,” read the meeting minutes. “Mr. Scott said he had not heard any negative feedback from the citizens about the moratorium, but has received support from the community for what we are trying to accomplish through the moratorium.”

The June 15 City Council meeting is scheduled to begin at 7 p.m. at Pelham City Hall.

Alabaster is continuing to see a rise in its new home and commercial building permits. (File) By NEAL WAGNER /... read more