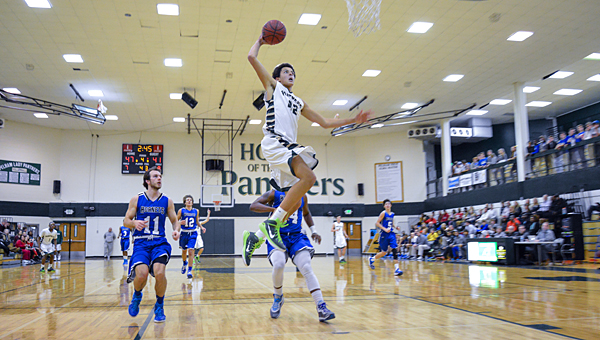 Pelham’s Alex Reese, shown here earlier in a Jan. 8 game against Chelsea, was recently invited to a tryout for the U16 USA National Team. (File)

This is all relatively new for Alex Reese.

The rising Pelham junior is also a rising basketball sensation. Standing at 6-feet-2-inches as an eighth-grader, Reese has since sprouted seven inches and now stands 6-foot-9. As he has grown, his impact on the basketball floor has grown in concert. The power forward has transitioned from a serviceable backup as a freshman to a legitimate, bona fide star as a sophomore. Due to his recent surge in height and impact, Reese is still relatively unknown on the national stage, but that is changing quickly, shown most recently by his invitation to try out for the U16 USA National Team.

Reese was invited to Colorado Springs on May 28 to try out for the U16 US National Team for a spot on the 12-man roster that will compete in the 2015 FIBA Americas U16 Championship. The spot became available to Reese when fellow Shelby County classmate Austin Wiley of Spain Park pulled out of the running because of an impending knee surgery. Reese was one of 29 of the USA’s top 16-and-under players, and went through four training sessions from May 28-30 before the first cuts were made, according to a USA Basketball press release. Reese did not make the first cut, but the experience will help shape his game moving forward.

Not bad for a kid who was coming off his high school bench for spot minutes just a year and a half ago.

His invitation to the national tryout is just the most recent acknowledgment of Reese’s burgeoning talent. As Reese has continued to shoot up, he has not lost the fluidity he had as a smaller guard, which is one of the strengths to his game and makes him unique.

“His big thing is he is able to play inside and out,” Pelham head coach Joel Floyd said. “He shoots the three as well as anyone, he handles it really well too. He has a soft touch with his left and right hand. He really stretches the floor as a big man. He’s got a Euro-type game.”

Reese is part of a three-headed monster of talent in the 2017 class in Shelby County. Reese joins Jamal Johnson and Wiley, both rising juniors at Spain Park, as an elite class of player who all are legitimate high Division I prospects. Wiley is currently a five-star prospect and is the 12th ranked player in the nation for the class of 2017 per Rivals.com while Johnson, a four-star guard, is ranked as the 32nd-best player in the class. John Petty, a Huntsville product, is ranked 39th in the class as well.

Currently unranked in the top-75 for the class of 2017 by Rivals, Floyd is convinced that will soon change for Reese.

“Without a doubt he’s a top-50 player,” Floyd said. “He wasn’t on the map last year but he’s really blown up this spring. Alex will do things that very few people get to do at the high school level, or any level (of basketball).”

As Reese continues to develop alongside Wiley and Johnson, the next few years of Shelby County basketball will feature a concentrated amount of high-level talent never before seen in the county.