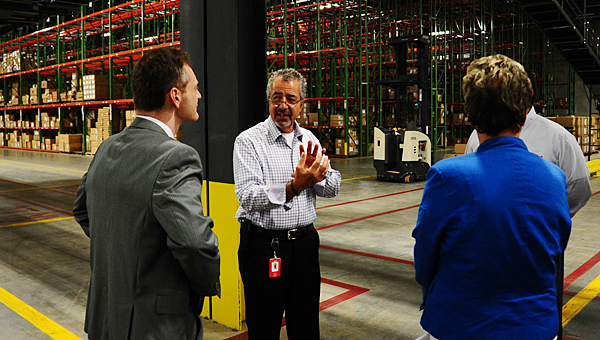 ALABASTER – Any item purchased from any Hibbett Sports store over the past year had to come through Alabaster first.

While the massive 420,000-square-foot distribution center in Alabaster’s Shelby West Corporate Park is an elaborate network of conveyor belts, shelves towering to the ceiling and an endless collection of merchandise boxes, the company’s vice president of distribution took a simplistic approach when explaining the process to a group of about 30 visitors on June 4.

“We basically get boxes from the receiving dock to the shipping dock. There are a lot of steps in between,” Vice President Tony Lago said. “Our primary focus is to be as efficient as possible in doing that.”

About 30 visitors toured the new Hibbett distribution facility, which opened last summer, on June 4 through a Greater Shelby County Chamber of Commerce industry tour, which was sponsored by Barge, Waggoner, Sumner and Cannon.

During the tour, company leaders explained the sophisticated – and highly automated – system used to supply the more than 1,000 Hibbett stores nationwide.

Once a truckload of merchandise arrives, it is unloaded and placed on the conveyor belt system, which stretches through the cavernous warehouse.

Each box has a barcode, which is read by scanners mounted along the conveyor route. The conveyor system then uses the barcode information to automatically route the packages to the correct area to be shipped to a Hibbett store.

The facility, which employs about 160 people on one shift, also handles store returns, keeps a large stock of high-demand merchandise ready to ship to stores and even has a holding area full of merchandise to stock soon-to-open stores.

On average, it takes a package about 12 minutes for a package to travel from receiving to shipping, Lago said.

“We are very happy to be here,” Lago said. “Eventually, we plan to grow together.”