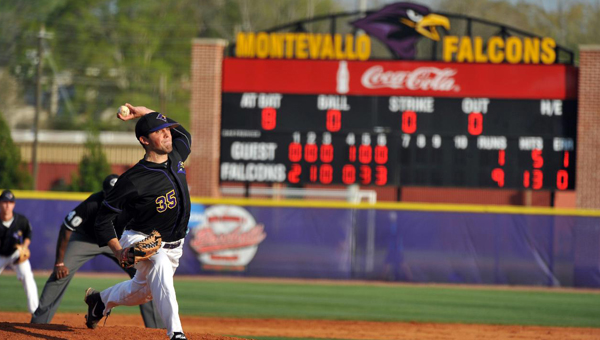 Devon Davis, a University of Montevallo graduate, was recently called up from the Winston-Salem Dash to the Birmingham Barons, the Double A affiliate of the Chicago White Sox. (Contributed)

Having made just three appearances with the Dash, the Class A affiliate of Major League Baseball’s Chicago White Sox, Davis was just starting to bond with his teammates.

One phone call changed everything for the University of Montevallo product. The White Sox were sending him to Double A to pitch for the Birmingham Barons. Davis was coming back to his fiancé, Rachel, and his collegiate roots.

“They put me on a 4 o’clock flight,” Davis recalled after receiving the phone call around 2:30 p.m. “I didn’t even get to go back to my apartment to get my stuff. I just packed my locker and hopped in the car and was on the first flight out to Birmingham.”

Davis, who was born in Burbank, Calif. and spent most of his childhood in the Mason suburb of Cincinnati, Ohio, arrived in Birmingham after the start of the Barons’ game against the Biloxi Shuckers on Tuesday evening at Regions Field.

“I showed up in the fourth inning or something and they told me go to the bullpen,” Davis said.

One day later, Davis made his debut with the Barons in front of several proud members of the Montevallo community. Davis entered the Barons’ game against the Shuckers in the top of the sixth inning Wednesday afternoon and pitched two innings in relief, allowing two earned runs on two hits with a pair of walks in a 6-3 setback against Biloxi.

Davis said he felt comfortable in his first trip to the rubber at Regions Field.

“It was an awesome experience,” Davis said. “Especially knowing some of the people I had in the stands who were there with me from college at Montevallo and now they’re here. I don’t have Twitter, but word gets out fast, I guess. (Chandler) Rose and (Erik) Maas are here and the 13-year-old team I coach in the offseason is here. My fiancé is here. It’s still pretty surreal. I don’t know if it has sunk in yet.”

Davis said he didn’t know if he would ever reach Birmingham after signing as an undrafted free agent with the White Sox after graduating from the University of Montevallo in the spring of 2014. He certainly didn’t expect to move through the White Sox system so quickly in his first two summers with the organization.

“It’s definitely cool to be back in Birmingham,” Davis said. I didn’t think it would be happening just a year after I signed. It was kind of in the back of my mind just thinking that would be cool.”

Davis has shined in his first four stops with the White Sox.  He started his professional career in the Arizona League with eight strikeouts in two scoreless appearances in relief last summer. Davis also made 15 appearances with the Great Falls Voyagers in the Pioneer League a year ago, recording a 1-0 mark and a 2.77 earned run average.

Davis started the 2015 season with the Kannapolis Intimidators, registering a 2-2 mark with a 3.86 earned run average. After three scoreless appearances with the Dash, the White Sox are giving Davis his most difficult challenge yet.

Davis said his collegiate career at Montevallo helped him prepare for a future in professional baseball. Davis helped the Falcons advance to their first Peach Belt Conference tournament championship game during his senior season in 2013.

“You have your ups and you have your fair share of downs,” Davis said. “That’s for sure. You just deal with a bad day and be able to recover from it and make the next outing better and have the results you want.”

More than a dozen University of Montevallo baseball players will be playing in summer leagues all across the United States... read more