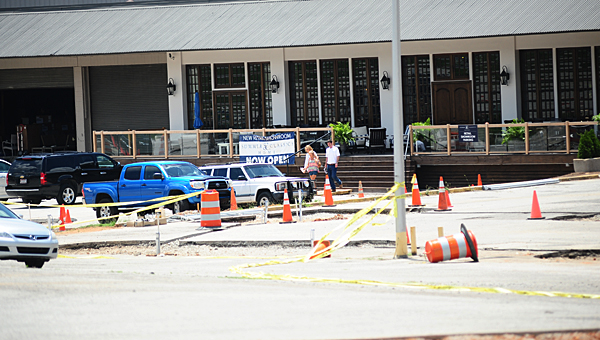 Customers exit the new Summer Classics showroom off U.S. 31 in Pelham on June 3. The company is in the process of repaving its large parking lot and adding a new entrance off U.S. 31. (Reporter Photo/Neal Wagner)

PELHAM – One of Pelham’s largest businesses soon will have a newly repaved parking lot and a significantly modified main entrance off U.S. 31, according to company and city officials.

Crews began prep work for repaving the parking lot at Pelham’s new Summer Classics headquarters about a month-and-a-half ago, and are targeting a mid-July completion date for the new blacktop, said project manager Roy Dollar.

Summer Classics recently moved into the more-than-500,000-square-foot former Moore Handley building off U.S. 31 just north of Pelham City Hall. Because the building sat vacant for several years after the closure of Moore Handley in the early 2000s, the parking lot was in need of significant repairs when Summer Classics moved in.

“It’s a big, old lot. I can’t wait to see what it’s going to look like when we’re done,” Dollar said on June 4 as he looked out over the parking lot.

Also through the agreement, Pelham retained possession of about 5 acres on the south end of the parking lot fronting U.S. 31. In conjunction with Summer Classics’ repaving plan, the city is moving one of the current parking lot entrances slightly south so it will line up with Yeager Parkway.

Pelham City Council President Rick Hayes said the city is working to attract a developer to construct retail space on the 5 city-owned acres. Because the 5 acres may be developed in the future, the city will seal coat, but not totally repave, its portion of the parking lot, Hayes said.

Once the parking lot access point is lined up with Yeager Parkway, Summer Classics is planning to line the entrance with trees and other landscaping, Dollar said.

“It will be a rather dramatic transformation once it’s completed,” Dollar said, noting cherry and oak trees will line the entrance.

After the repaving and beautification projects are completed, Pelham is planning to aggressively market its 5 acres to potential developers, Hayes said.

“It’s all part of the plan,” Hayes said. “We are going to let (Summer Classics) finish their project before we bring anyone major in.”