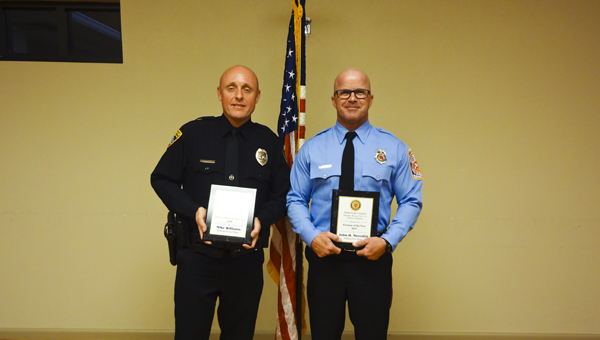 Post 555 Commander Barry Blount announced Mike Williams as the 2015 Police Officer of the Year, and John H. Meredith the 2015 Fireman of the Year, amid family members, colleagues and Post 555 members packing the Pelham Senior Center.

“Mike has always had this great passion for the community,” Pelham Police Chief Larry Palmer said of Williams. “This was a decision made by our entire department. We nominated Mike for this tonight because of his community service. You just will not find a finer fellow than Mike Williams.”

Palmer said Williams started working for the Pelham Police Department in April 2001 and has been instrumental in organizing the department’s fundraising efforts for Special Olympics.

Williams deflected the praises, giving credit to others who have contributed time and funds to the annual Torch Run, Polar Plunge and other philanthropic events supporting special-needs athletes in Shelby County.

“My name’s on (the award), but there are dozens and dozens of people who come and help,” Williams said. “This is really everybody’s award who does that.”

Deputy Fire Chief Blair Sides spoke highly of Meredith, who, in addition to being named Fireman of the Year in Pelham, will receive a state award for his service later this month.

“It was pretty obvious quickly who we would select,” Sides said. “Everything John does just reflects an enthusiasm (and) pride.”

Sides said Meredith has been with the fire department for 12 years, but overall has more than 20 years of service and 60 different certifications.

“Because of John’s attitude, his knowledge, he just reflects everything you’d want as a fireman,” Sides added.

Like Williams, Meredith humbly accepted his award and expressed gratitude to his family and superiors for their support.

The group has increased to about 74 members with a goal of reaching 100 members by the end of 2015.

Post 555 bears the name of one of Barry Blount’s sons, Matthew, who served as an Army field medic in Iraq and passed away in 2012 after battling a rare form of cancer.

Barry Blount said the formation of Post 555 has much to do with city and school system officials’ support, especially considering the post’s dependence on donations to operate.

This year, Post 555 was able to send four students to the American Legion Boys State and American Legion Auxiliary Girls State programs, which teach participants how government works and allows them to apply leadership skills.

“Everything that we have touched has turned to gold,” Blount said. “The Lord has been looking after us. I cannot get over everything that’s come our way.”